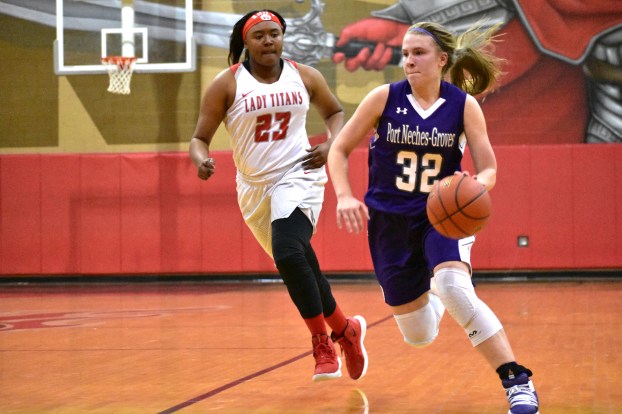 Say it: Playoffs … Indians make history ahead of rematch with co-leader Lady Titans

Port Neches-Groves’ road win at Nederland on Friday might as well have turned ceremonial.

Shortly after seeing their boys basketball team beat Nederland at The Reservation for the first time in 13 years, the PNG girls team posted photos of their purple T-shirts that captured the importance of their 48-26 victory on Twitter. The shirts read: “Tonight’s the night we made history!”

The Indians had just earned a UIL playoff berth for the first time in program history.

“It’s a good feeling,” junior guard Maylin Stampley (12.5 points per game) said. “It’s a lot of hard work paying off. We’ve come in here and worked every day knowing that’s the biggest goal. With all the adversity we faced, we kept pushing forward.”

PNG (19-10, 7-2 in 21-5A) hasn’t been immune from adversity this season, losing two key post players to injury. But the years of frustration and not competing toe-to-toe with other teams was an impetus for making this season the one misfortune would turn into fortune.

“A lot of hard work,” second-year head coach Kara Skinner said. “Kids determined to go play and win. They decided a long time ago they wanted to be the team that changes that [misfortune]. They got tired of getting beat. Who wouldn’t?”

In Port Arthur, Kevin Henry knows the feeling quite well.

His Memorial Lady Titans (14-10, 8-1) missed out on the playoffs each of the past two seasons. Now, they’re sharing the lead with Barbers Hill in District 21-5A.

“Success brings more success,” Henry said. “With us being able to win some close games and find a little identity within ourselves, that’s helping our girls learn to play better as a unit and really just set each other up for success so we can be successful as a group.”

Tuesday night, the Titans and Indians will hook up in a rematch of a 45-44 Memorial victory in Port Arthur on Jan. 4, and a championship is still at stake with three games to play for each team. Memorial last won a district title in the 2011-12 season, Henry’s first at the helm.

“I like to play Memorial,” Skinner said. “I like coach Henry. I think he’s a great guy. I think he’s somebody you can learn a lot from. He’s helped me out in a lot of ways. We always get excited to play them. The kids talk to each other outside of basketball, so it’s always a fun matchup. It’ll be challenging, but I think we’re prepared.”

PNG will have both senior post players who were out during the last meeting available. During the East Chambers tournament last month, Chelsea Carrillo (10.9 points per game) sustained an elbow injury and Harlee Barnwell tore an ACL. Barnwell elected to have surgery on the knee after the season, Skinner said.

“I’m way too excited to see them,” Carrillo said. “I’ve played them three years, and every year, it’s come up with a loss. This time, we’re closer than we’ve ever been before. That’s without two key post players. This time, with both of us, we can do a lot more damage. We can beat them by one point.”

Memorial is 5-0 against PNG since the two schools became district opponents in the 2016-17.

Memorial has won six straight overall, mainly behind the shooting touch of 6-foot-2 senior Julia Sion (11.4 points, 9 rebounds and 2.3 steals per game). She had 22 points Friday in a come-from-behind 63-60 home win over Vidor.

“She pretty much did a good job of working in the offseason and expanding her range,” Henry said.

That gave moved Memorial into a first-place tie with Barbers Hill, whom the Titans beat 41-34 last Tuesday. Barbers Hill was off Friday.

“I feel like since this is most of ours’ senior year, we really want it more than in the past few years,” Sion said.

The Titans have depended on balanced scoring this season. Junior Jacqualyn Gibbs (6.2 points, 7 rebounds, 3 assists, 2.5 steals) and senior Dakayla Miller (6 points, 4 assists and 4.1 steals per game) have all-around games and lead the defensive charge — something the Indians take pride in.

“We’re communicating more,” said junior Mollee Priddy, PNG’s leading scorer at 13 points per game. “Our practices definitely have more energy. I think that was most of our problem. We definitely responded and we’re going to respond [today].”

The sense of accomplishment, Miller said, feels greater than in past seasons.

The Memorial boys team’s 5A state championship run has rubbed off the Lady Titans in a way that motivates them to pull off a long playoff trail of their own, Miller said.

“We feel like we should have equaled our talent to their talent to be just like them, basically,” Miller said.

Skinner has focused on teaching fundamentals and helping the Indians build their basketball knowledge during the program’s renaissance.

“We didn’t have that basketball IQ that a lot of teams have, just being able to see the floor, understanding how to execute things,” she said. “If the defense is a certain way, what should we do in responding?”

The little things for both the Titans and Indians have paid off — so has winning itself.

“We started seeing a winning record and more and more success,” Carrillo said. “It finally hit us we’re not all that bad. We have to work harder and do better every time we play. We come this year, and it looks good. It looks better. It motivates us every time, so why stop improving?”
•