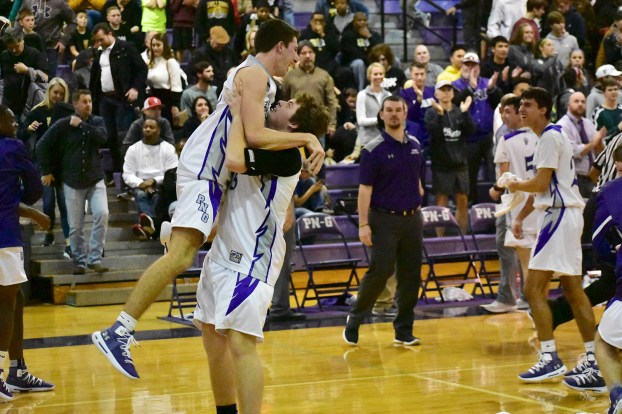 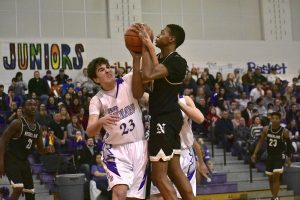 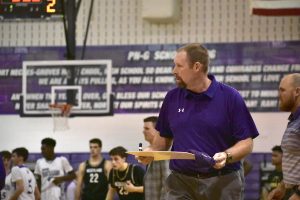 PNG coach Pat Abel walks off the court following a buzzer-beating field goal that gave his team a 29-21 lead against Nederland on Friday in Port Neches. (I.C. Murrell/The News) 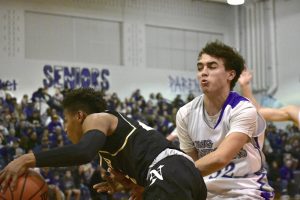 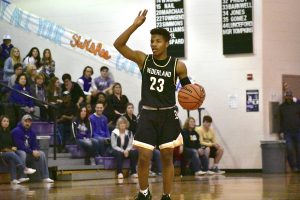 Cedric Pete of Nederland calls a play during the second quarter at Port Neches-Groves on Friday. (I.C. Murrell/The News) 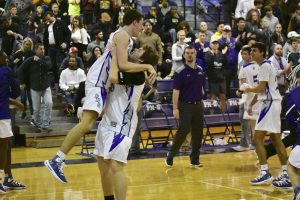 PORT NECHES — Before Trent Lee could answer a question, Port Neches-Groves students stormed the court toward him and fellow senior Drake Rojas.

About a minute later, Lee got to reflect on what just happened.

“It’s the biggest thing ever,” he said. “I’ve been trying to beat them since freshman year. We finally got it, man.”

PNG had just achieved something for the first time in 13 years — beating Nederland in boys basketball.

Lee nailed six three-point baskets and scored a game-high 22 points Friday night, leading the Indians to a 61-51 win over the Bulldogs in their third meeting of the season. Nederland had won the first two, 61-46 in the Hardin-Jefferson Basketball Marathon on Dec. 7 and 53-40 two weeks later in the first District 21-5A meeting.

“This year, we’re coming different,” Lee said. “We want it bad this year. We want it more than them.”

More importantly, PNG tied Nederland for third in District 21-5A standings with four games to go for each team.

Friday’s loss was Brian English’s first to PNG in his 13 seasons helming alma mater Nederland. The Bulldogs have dropped three of their last four and had dodged an upset at home Tuesday against Vidor.

“Coach English has done a phenomenal job over there,” 19th-year PNG coach Pat Abel said. “He’s had some special players, and we’ve gone toe-to-toe with them a lot of times. But this one is pretty special for our kids, and they’re starting to believe.”

The Bulldogs evened the score at 9-9 at first quarter’s end after trailing 5-0. Hayden Hefner sparked a 7-0 run early in the second to build an 18-12 Bulldogs lead before Lee helped the Indians wake out of an almost 4-minute scoring drought with a three-pointer.

Jackson Simmons put PNG in front, 22-20, with a bank shot at the 2:08 mark before halftime. That opened up a 9-1 run capped by Tracy Smith’s banker at the horn.

Going into the fourth … pic.twitter.com/NcxR6RFTCf

“We practiced defense every day of this week,” Rojas said. “We were shooting all day, every day. We just had to come out and do it. This is our year.”

Still, Tyler Jackson was keeping Nederland in it with 10 of the team’s 12 points that period. He led the Bulldogs with 16 points.

Nederland pulled within double digits in the final 64 seconds, but the Indians made 8 of 11 free throws during that stretch to seal the win.

Joseph Gipson had 12 points and Hefner nine in the loss.

PNG’s next upset bid will take place Tuesday at Memorial, which was tied with Barbers Hill for the district lead going into Friday.

“When you’re starting the second half of district and there’s hope, you see the cream rise to the crop a little bit, and I think our kids are starting to notice that,” Abel said. “They’re believing in themselves and in what they might be able to accomplish.”

Nederland will visit Cleveland on Tuesday.

PORT NECHES — Atlanta holds a special place in Stephanie Roberts’ heart. The city, not the Falcons. “I had asked... read more