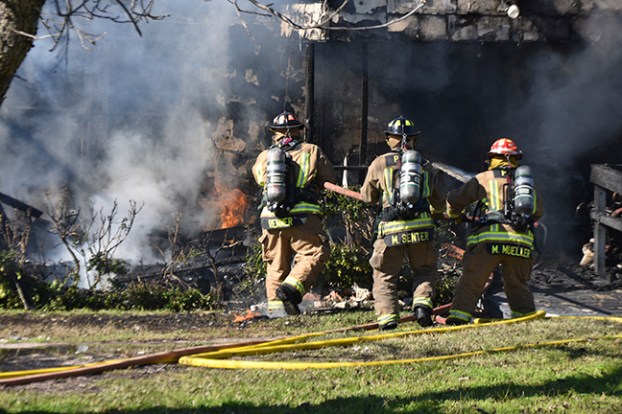 Members of the Port Arthur Fire Department work to put out a fire at a home in the 3100 block of 25th Street on Thursday. No one was injured in the fire, thanks to the efforts of a neighbor who helped a man inside the house escape before the fire department arrived. (Chris Moore/The News)

A man escaped a house fire thanks to an unknown neighbor Thursday.

The Port Arthur Fire Department responded to a house fire in the 3100 block of 25th Street.

Battalion Chief Jay Fountain said the department received a call at 1:45 p.m. and said he believes the fire started on the front porch. No one was injured and firefighters were able to contain the fire before it spread to the back in of the house.

“An elderly man was inside the home at the time of the fire, but a neighbor came by and banged on the window,” Fountain said. “As we arrived, he was already out.”

A next-door neighbor said she heard a “loud pop” and walked outside to find her neighbors house in flames. At that time, the man was walking out of the house. The neighbor said she spoke with the man, who said he wasn’t aware of the fire until he heard someone beating on the window.

Fire Marshal Paul Washburn said they did not know which neighbor banged on the window, and there was no reason to suspect anything criminal at the time.

The Port Arthur International Seafarers’ Center and the Greater Port Arthur Chamber of Commerce on Thursday declared victory in a... read more