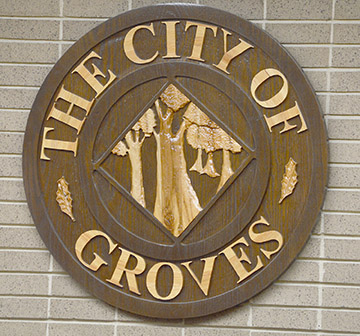 GROVES — Groves city leaders are set to meet with their business community later this month in a newly created Groves Business Round Table.

Groves City Manager D. Sosa said they are inviting Groves businesses to get together and see what can be done to improve the city’s business climate.

Groves resident and Port Arthur business owner Michelle DeJean — her automotive shop is on Twin City Highway on the Port Arthur side of the road — brought the idea to Sosa before Christmas, he said.

“I think this is positive for this community,” he said.

There has been a similar initiative in the city but not a developed program. The Groves Economic Development Corp. is designed to offer rebates to businesses that do certain curb appeal projects such as lighting, security, signage and more.

“We’re not going to see another Kmart, Sears or ‘big box’ store but we see so many mom-and-pop operations that are the backbone of the city,” he said.

What he does see is a turn back in time, so to speak. Where the malls were popular in the 1970s and 1980s, there’s a turn back to the mom-and-pop stores. He cited Paige Hervey, owner of The Collection, and Beverly Herford of Merle Norman in Groves.

“Paige Hervey says it best, you need a personal knowledge of the customer, a relationship. Know their first name. We’re kind of reverting back to small downtown and mom and pop and now people are looking at a relationship that’s not a rush in and rush out. And with Merle Norman, there is a relationship and you have one satisfied customer who tells another and so on.”

Longtime businesswoman DeJean knows the importance of sustaining the current business and bring in new ones. One problem she sees is that there is not real incentive for a business to locate in Groves. Her auto shop was in the city years ago but as her business grew she needed a bigger facility and there weren’t many sites in Groves with the square footage she needed, she said.

She suggests the city needs to revamp its look in order to bring more business there.

“No viable entrepreneur that needs the public funds will want to bring their business to a city that has nobody to sustain their business,” DeJean said. “I live in Groves. The citizens are like ‘How come there’s not more commercial buildings and businesses? You tell us to keep our money in the city but we have to shop in Port Arthur and Nederland.”

Sosa said that during the upcoming meeting there will be a presentation from Keith Montgomery who will tell of a Shop Mid-County phone app that will allow any Groves business or several Groves businesses to be accessed online with one platform and check out for merchandise.

He said there are other ways to help the business climate. He looked back to something an economic development director in Giddings once told him regarding the town, which is on a highly traveled major highway between Houston and Austin: “They’re not going to throw their money out the window; you gotta get them to stop.”