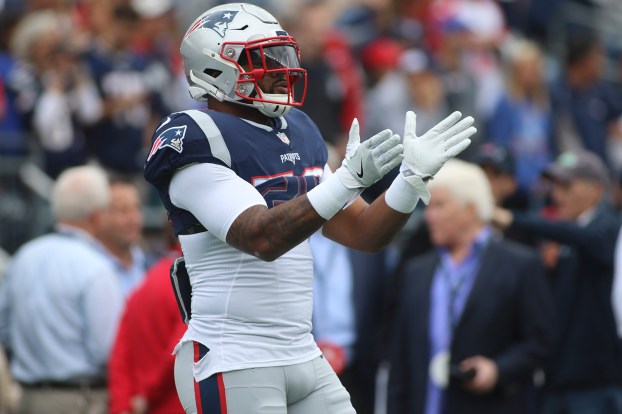 Elandon Roberts, originally of Port Arthur, is going to his third Super Bowl in as many years as an NFL player. (Michael Sudhalter/Special to The News) 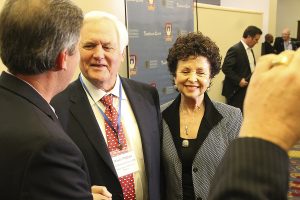 Los Angeles Rams defensive coordinator Wade Phillips and his wife Laurie meet and greet guets at the Touchdown Club of Houston’s “Super” Alumni Luncheon on Jan. 30, 2017, in Houston. Phillips was a defensive coordinator on two of the Denver Broncos’ Super Bowl teams (1989 and 2015 seasons), winning the latter. (I.C. Murrell/The News) 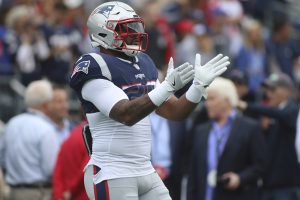 Elandon Roberts, originally of Port Arthur, is going to his third Super Bowl in as many years as an NFL player. (Michael Sudhalter/Special to The News)

The last time Wade Phillips coached in a Super Bowl, he had quite a defense to work with.

Since then, Elandon Roberts has qualified for three straight trips to the Big Game.

DeMarcus Ware — whom Phillips mentored as Dallas Cowboys head coach — Von Miller and Danny Trevathan were the linebackers on a 2015 Denver Broncos team that beat the Carolina Panthers 24-10 in the Feb. 7, 2016, Super Bowl 50. Cornerback Aqib Talib was among the defensive backs who made up the Broncos’ “No Fly Zone” secondary.

This time, Roberts and the Patriots will meet them there.

Roberts is going to his third Super Bowl in as many years he has played in the NFL. The Super Bowl 51 winner and the New England Patriots beat the host Kansas City Chiefs 37-31 in overtime in the AFC championship game on Rex Burkhead’s 2-yard touchdown run. Both Phillips, a 1965 Port Neches-Groves graduate, and Roberts, a 2012 Memorial alumnus, both played linebacker at the University of Houston.

The Rams (15-3) qualified for their fourth Super Bowl in franchise history Sunday when Greg Zuerlein connected on a 57-yard field in overtime of a 23-20 win at host New Orleans. It marked the first time both conference championship games in the same season went overtime since the first Super Bowl was contested in the 1966 season.

The Rams, who are in their third year back in Los Angeles, lost Super Bowl 14 to the Pittsburgh Steelers in the 1979 season, beat the Tennessee Titans in Super Bowl 34 in the 1999 season and lost to the Patriots in Super Bowl 36 in the 2001 season. The Rams had been based in St. Louis since 1995.

Kansas City (13-5), quarterbacked by Whitehouse graduate Patrick Mahomes, came from 14-0 down and had traded leads in the final 2:04 of regulation. Harrison Butker kicked a game-tying field goal from 39 yards out with 11 seconds left.

Phillips is coaching in a Super Bowl for the third time in his career. He was defensive coordinator on the 1989 Denver Broncos, who suffered a 55-10 loss to the San Francisco 49ers in — of all places — the Superdome in New Orleans.

Fate was much kinder to Phillips nearly 30 years later.

A missed third-down pass interference call with 1:45 left in regulation forced the Saints (14-4) to settle for a go-ahead field goal. Nickell Robey-Coleman knocked intended receiver Tommylee Lewis to the ground before Lewis had a chance to make a catch. A penalty would have given New Orleans a chance to run some clock down and/or go for a touchdown from 6 1/2 yards out.

Instead, Greg Zuerlein kicked a 48-yarder to tie the game with 15 seconds left.

But the Rams’ latest Super Bowl run, as was the Broncos’ in the 2015 season, will be best remembered for Phillips’ genius defensive play-calling.

The cherry on top for Phillips was John Johnson III’s interception of a Drew Brees pass that set up the winning drive. Zuerlein’s 57-yard boot went straight down the middle of the uprights.

To begin with, Phillips helped slow down a high-octane Saints offense that had taken a 13-0 lead.

After Zuerlein put Los Angeles on the board, the Rams forced the Saints to punt on their next two series and capitalized just before halftime with a Todd Gurley touchdown run.

Having grown up across the country as a traveling architect’s daughter, Sarah Bellian did not understand why high school sports... read more