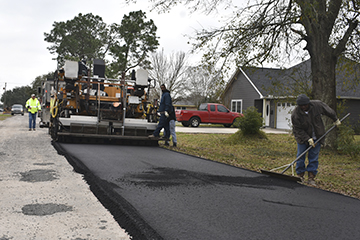 Work crews repair a section of Oak Avenue in Groves on Tuesday. The street was set to be repaired with the city’s 2018 streets project but weather did not cooperate. Mary Meaux/The News

GROVES — A Groves road that was set to be repaired as part of the city’s 2018 streets program is receiving more attention than was initially planned.

“Because of all the rain and the cooler finish to last year we had one more street to do, Oak Avenue off 25th Street,” Groves City Manager D. Sosa said. “And because it got cold on us and weather conditions weren’t cooperating we had to switch gears to (using) asphalt. It’s a little more expensive but it wasn’t fair to leave the street until the summer.”

Sosa visited the work site Tuesday and said it looks like a great job and he believes the neighborhood residents will like the work.

The section of Oak Avenue was under water for two to three days during Tropical Storm Harvey in 2017. A section of 25th street, the major connector to the avenue, was held off as well because it was under water during the flood and needs to be rebuilt, not just seal coated, he said.

Sosa said Oak Avenue was scheduled to be repaired in August or September 2018 with a different material than is being used now.

“It was supposed to be chip seal or what is called inverted penetration,” he said. “This method can only be done when the temperature is above 80 degrees.”

Instead of chip seal the city is going with the more costly asphalt. Depending on the price of oil, the cost is as much as 40 percent more for asphalt over sealcoat or chip seal.

The city has been working to finish the street since October and it was scheduled to be finished Tuesday.

But this isn’t the last of the work to fix Groves roads. The city is waiting for access to a $4.2 million Texas General Land Office grant.

The funds are disaster funds related to Hurricane Harvey and are earmarked for street work, drainage, water and sewer work and anything damaged or impacted by Harvey, Sosa said.

A stipulation for the grant is 70 percent of the work must be in a low- to moderate-income area of the city.

The low-to-moderate incomes stipulation has nothing to do with government housing or Housing and Urban Development housing — it is focused on infrastructure improvements only.

In addition, the city has doubled its streets program funding from $300,000 to $600,000 and this money will supplement General Land Office money, according to information from a Dec. 21, 2018 Port Arthur News story.

“So, theoretically, we’re in the neighborhood of $4.8 million we plan to spend on streets, some drainage over the next year’s budget,” he said. “And with the next fiscal year budget that’s another $600,000.”

All clear after SWAT standoff in Port Neches

PORT NECHES — No injuries were reported after Ridgewood Elementary School and some neighboring homes were evacuated as SWAT worked... read more