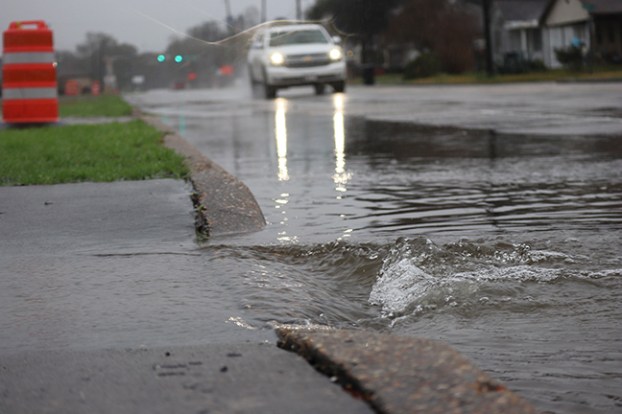 Water flows down 21st Street in front of Bulldog Stadium on Thursday after a recent bout of rain. (Chris Moore/The News)

Wet start to new year: No major issues from weather, but water still seeps into homes

Rain continued to fall over southeastern Texas with a flash flood watch in effect into Thursday afternoon but no major issues were reported in Mid and South Jefferson County.

And while some residents watched their ditches fill, Priscilla Crain watched the water reach across her yard and into one of the rooms of her home — again.

Crain has lived in the same home for decades in the Pear Ridge area of town. Behind her backyard fence, and that of her neighbors, is the remnants of an old water treatment plant and, not far away, a concrete drainage ditch. Crain said the ditch is owned by the city. Rainwater had half filled the ditch as of 3:30 p.m. Thursday. But the water had gone down in her yard, she said.

In fact, she said her home has flooded eight times since Harvey.

Crain stood in the room pointing out areas that had been repaired with the help of Operation Blessing, a nonprofit humanitarian helping those in need.

“It’s always been low but not like this here lately,” she said.

While Crain cleans up the water from her new floor, her yard remained under water in some areas and a break from the rain was on the way.

Kent Kuyper with the National Weather Service-Lake Charles said the rain was due to a frontal boundary extending from the Florida panhandle to a surface low near Beaumont and down to a cold front in Mexico.

Rainfall totals were not fully tabulated yet but it seems like the Beaumont area would see about 4 inches total.

Deputy Chief John Owens with Port Arthur Police Department spoke from a law enforcement perspective, saying there hadn’t been any rain that would cause any street flooding as of early afternoon.

“We have not received any calls from anyone in regards to ongoing conditions,” Owens said referring to driving conditions.

Neither Nederland nor Port Neches saw street flooding either.

Ronnie Hollier, supervisor with Jefferson County Drainage District No. 7, said crewmembers were called in around 8 p.m. Wednesday to staff pump stations — there are 20 in the district — and pull trash from forebays.

“We have been working around the clock and are still manning the stations now as we speak,” Hollier said shortly. “We will continue to pump the system down to normal limits and will be ready for the next one, which looks to be Monday.”

Local law enforcement discuss church shootings and how to respond

PORT NECHES — Shortly after a deadly church shooting near Fort Worth at least one local church is asking law... read more