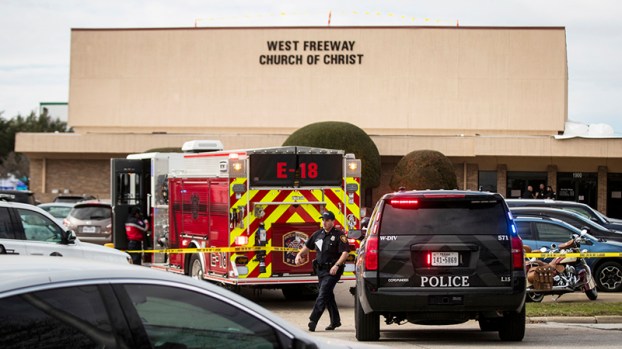 Police and fire departments surround the scene of a shooting at West Freeway Church of Christ in White Settlement, Texas, on Sunday. (Yffy Yossifor/Star-Telegram via AP)

Local law enforcement discuss church shootings and how to respond

PORT NECHES — Shortly after a deadly church shooting near Fort Worth at least one local church is asking law enforcement for help while organizing a security team.

Port Neches Police Chief Paul Lemoine said his department received a call from an official with a Port Neches church wanting to hire an officer for security at their service on Sunday as they get a safety team organized. He did not name the church.

Lemoine said the church leader is not so much afraid as they are concerned because “evil does exists in this world,” partly quoting a Facebook post by Jack Wilson, a former reserve deputy and firearms instructor who fired the shot that killed a gunman at West Freeway Church of Christ on Sunday.

“Evil does exist in this world,” Lemoine said. “It’s up to each individual to be prepared to react in the event that something like this were to occur.  What we do as individuals or members of a security team does matter. We may not be able to prevent these things from occurring, but what we do may limit the number of casualties.”

This isn’t the first local church to initiate security measures — many have done so since the 2017 Sutherland Springs church shooting that left 26 dead, he said.

He also knows there needs to be some sort of action should there be an active shooter incident — recalling one shooting spree where the gunman was walking down the aisle at a church shooting then stopped to reload.

“You have to do something to protect yourself whether you’re armed or not,” he said.

Some churches lock their doors when the service has begun, but when looking at the recent shooting in White Settlement, it becomes clear that the shooter was already inside the house of worship. Having security watch the congregation and trained to know what to look for could save lives.

He said the training is important and when they arrive they look at the business, at their security features and give advice.

“The main thing we offer is advice based on our experience of what we’ve seen, what we know and from our education to be better prepared,” he said.

Nederland Police Chef Gary Porter said all of the churches he knows of in his city have an armed security team.

On occasion he has spoken to some of the church groups about security issues and as talked to churches about active shooter protocol.

Porter believes many of these types of shootings are due to mental illness.

“I’ve been a police officer a long time, since 1977,” Porter said. “The state and federal government failed to fund the adequate mental facilities to where we can help people in mental crisis. We are just now starting to make some baby steps in that direction.

“Dealing with people who are having a mental crisis has become one of the more prevalent activities police handle — it wasn’t always this way. But “now police officers are trying to make PhD decisions on (this).”