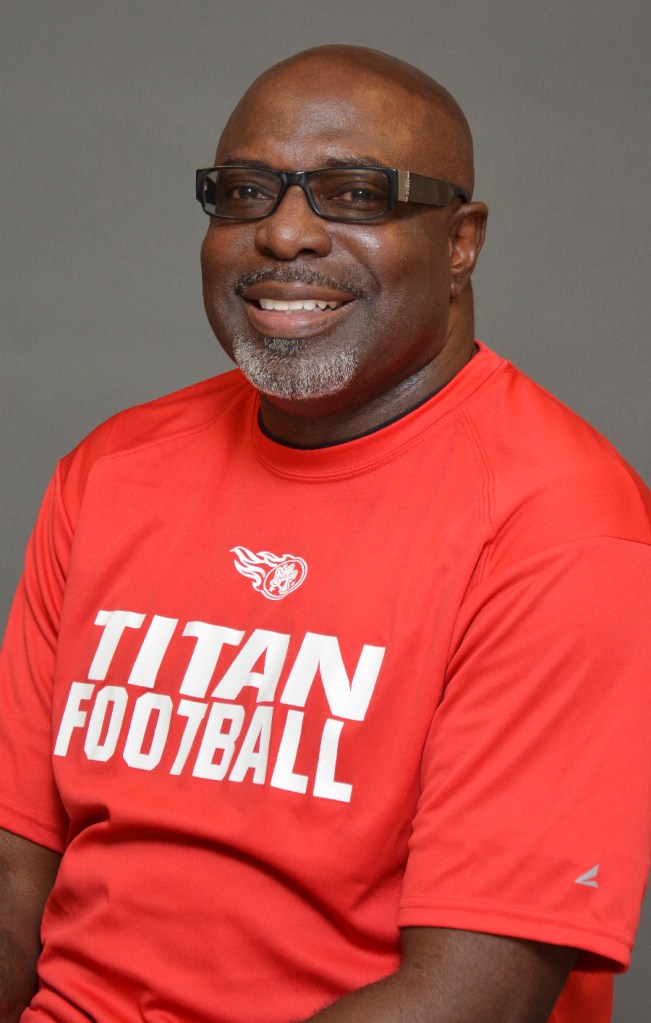 If anybody forecast Memorial’s 2017 boys 4×100-meter track team would run 39 seconds at the state championship meet, Kary Vincent Sr. did.

“I can remember the last two meets of the season,” Memorial track coach Darrell Granger said. “… He said, ‘I told you we would [run] 39 seconds.’ That year, we had done it.”

The quartet of De’Andre Angelle, Kary Vincent Jr., Xavier Hull and Ireon Brown set a UIL 5A state meet record of 39.80 seconds, coming 0.04 shy of the national record set by Fort Worth Wyatt in 1998.

Vincent Sr., a football and track standout at Thomas Jefferson High School in the late 1980s who coached sprinters and cornerbacks at Memorial, has died. He was 49.

Titan Nation lost an unbelievable human being today. Your personality and charisma will be sorely missed.

The cause of death has not been confirmed, but Vincent Sr. had missed all but the Titans’ first football game of the season with a second bout of pneumonia this year.

“Just an unbelievable personality,” Memorial football coach and athletic director Brian Morgan said. “He really lit up the room when he came in. Just this season, we missed him. We enjoyed having him around in the office. He kept the mood light. We missed his personality. He’s a great storyteller. He’s a great coach on the coaching side of things.”

Vincent was also a teacher at Thomas Jefferson Middle School in addition to his coaching duties at Memorial High. He had worked in the Port Arthur ISD for 16 years.

I only worked with Coach Vincent for 1 football season, but his reputation of being a great coach, mentor and father figure to so many Port Arthur athletes rang far and wide for years. We pray for his family and all those he’s positively impacted over his lifetime – Rest Easy KK pic.twitter.com/PYMYaWCt6J

Morgan, who graduated from Thomas Jefferson High in 2001, said Vincent was always around the program when he was in high school.

“When we were in school, he was at Thomas Jefferson and I was at Lincoln,” said Granger, who finished high school the same year Vincent did. “He always talked about, if he went to Lincoln, how much better our teams would have been.”

Kary Vincent Jr., the third of Vincent Sr.’s four children, played in the 2017 Under Armour All-America game as a cornerback and signed the following month with LSU. Vincent Jr. won state championships in the 200-meter in 2016 (in 6A) and 2017 (in 5A) and helped LSU win the Southeastern Conference 4×100-meter title last spring.

I love you daddy

“Once coach Verril Young retired, I gave the sprinting group to coach Vincent,” Granger said. “He was a big part of those relays. He played a big part in the success we’ve had the last couple of years.”

Vincent Sr. was born Sept. 19, 1969. He played at Texas A&M as a wide receiver and cornerback and was drafted in the sixth round (164th overall) by the New Orleans Saints in 1992. He also spent time in the Canadian and Arena football leagues.

On April 27, 2005, Vincent Sr. was hit by a driver on Memorial Boulevard in Port Arthur while he was riding his motorcycle. He sustained compound fractures in his leg and arm and was forced to miss two seasons of coaching football. Vincent said in a September interview he and the driver settled out of court.

He first battled pneumonia in July of this year after coming back from vacation in the Bahamas and a coaching clinic in San Antonio. Vincent said he was dehydrated at the time.

That case of pneumonia, he said in September, never went away when a new case was discovered that month.

Vincent Sr. drove his wife and youngest son to Arlington the day after coaching in Memorial’s season-opening victory over Deer Park to watch Vincent Jr. and LSU play Miami in their first game of the year. Vincent Sr. was then sent to an Arlington hospital, where he remained in a coma for three weeks.

Thanks for everything Coach Vincent. For being my coach, giving me knowledge and being my pops. I really appreciate the times we had, the times you got on me, the cap session, all that. Love you pops, get your rest, will see you soon ❤️

“He came by the office and visited,” Morgan said.

“He was a great mentor to us. He developed some relationships with players and coaches that were longer lasting.”

Vincent Sr.’s survivors include wife Angela, daughter Meshawn and sons Kameron, Kary Jr. and Kyler. No funeral arrangements have been announced yet.

Granger said Vincent Sr. will be missed and there will be “a lot of shoes to fill” within the Titans’ track program.

“But we’re going to make it work for him,” Granger said.