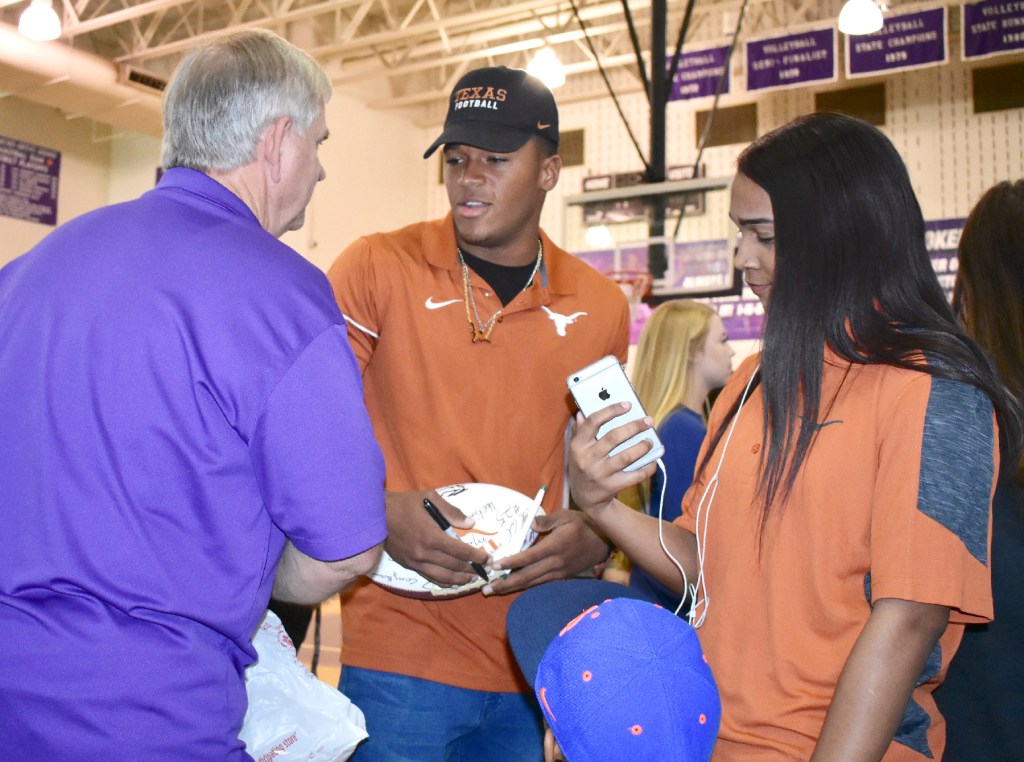 PORT NECHES — The deal is done. Roschon Johnson was not going to have it any other way.

“My mind was pretty much set when I committed,” Johnson said. “I knew what I got myself into, and now it’s finally here. I’m relieved to get it all done.”

The Port Neches-Groves quarterback highlighted the start of the December signing period for Southeast Texas’ major-college football prospects by officially committing to the University of Texas on Wednesday at PNG’s gymnasium. He was one of seven PNG athletes who signed letters of intent and one of four going to Division I programs.

Droddy said, with a laugh, she tried to get Johnson to switch his commitment to the Aggies.

“We pick on each other a lot,” she said. “He’s out there with football and I’m out there with track. We always try to convince each other: ‘Nah, you should have came here.’ We just pick. He’s a good friend of mine.”

But from the time in July 2017 Johnson met incoming Texas coach Tom Herman, there was no turning his back on the Burnt Orange nation, whose Longhorns (9-4) will take on Georgia in the Jan. 1 Sugar Bowl. Herman was taking over for current South Florida head coach Charlie Strong, who was fired after the Longhorns missed bowl games in two straight years.

“I think a few months after [Herman] got the job, I began to build a relationship with the coaches,” Johnson said. “I just got to learn everything about the university and about the culture there.”

Johnson (6-feet-1, 200 pounds) is the only quarterback in the Texas December signing class of 21 and will have to challenge starter Sam Ehlinger and Shane Buechele for playing time next fall. He’s the ninth-ranked dual-threat quarterback nationally and a four-star player, according to Rivals.com.

While the Longhorns have surged back into prominence and made the Big 12 championship game under Herman, Johnson said the challenge of helping the Horns become a national title contender again separated Texas from countless major programs who offered him.

Johnson was voted Texas Associated Press Sports Editors honorable mention 5A all-state quarterback despite rushing for 27 touchdowns and 1,619 yards and passing for 22 touchdowns and 2,338 yards. He has 12,462 total offensive yards and 169 touchdowns for his three seasons as PNG’s starting QB.

The APSE also named Memorial’s Lazarus May was named honorable mention 5A defensive lineman. The all-state list was released Wednesday.

Droddy will live out her childhood dream of competing with the Aggies beginning in 2020.

“It’s always been my dream school,” she said. “I finally got in contact with them, and they offered me. I immediately said yes, because it’s my dream school, and I’m excited for it.”

But first, the senior wants to bring a state championship to PNG. She finished sixth in the 5A long jump last May and fifth in 2017.

“I’m really excited for the season,” she said. “I hope to get top three in the long jump and in the 200 in state.”

Gil waited to sign with the Cardinals since the start of her sophomore season.

“I waited for this day for two years,” she said. “… I went to their volleyball camp over the summer going into my sophomore year, and they offered me. I went on an unofficial visit, and I committed the next day.”

Lamar went 7-20 this season under Michelle Kuester, who’s since had the interim tag removed from here. The Cardinals have not won double-digit matches since 2015.

Simmons said he drew interest from New Mexico while he was playing for Houston-based Team Marucci during the summer.

“It means everything,” he said. “I’ve been dreaming about this my entire life. Being here, being able to play baseball and continue my academic and baseball career further and further and maybe beyond the college level someday.”

New Mexico is trying to turn things around following a 20-33-1 season last spring in which it was last out of seven teams in the Mountain West. The Lobos were 30-27-1 the year before and won the Mountain West Conference regular-season title.

“They’re really good in the Mountain West, and they do win it often,” Simmons said. “Last year, they might not have been as good because they lost a lot of seniors to the draft and what not, but I think we’ll continue to get better as I get there and more people get recruited there.”