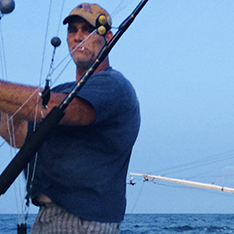 On Thursday November 29, 2018 Robert Keith DeRutte passed away at the age of 58.  Robert was born in Beaumont, Texas February 5, 1960 to Lola and Gene DeRutte.  Robert was an exemplary athlete.  He excelled at track and field, basketball and football at Port Neches Groves High School.  He received a full football scholarship to LSU where he played safety.  Robert spent most of his adult years working at several refineries in Port Arthur and Port Neches.  He loved working and took great pride in his work and in everything he did. His greatest passion was fishing.  As a young boy, he had an uncanny ability to catch fish when no one else was.  Whether it was salt-water or fresh, he knew his stuff.  But the thing that was really special about this fisherman was he shared his catch with all his friends.  It was one of the most endearing things about him.  Robert loved helping his friends.  He had a heart of gold and he will be missed by many.  Robert was preceded in death by his mother, Lola.  He is survived by his father Gene, his brother Ronnie, his sister Michelle, his son Corey, his step-son Daniel, many cousins and a nephew.   There will be no funeral services at Robert’s request but there will be a celebration of his life in the near future.  Contributions can be made to an account at Community  Bank of Texas.  The funds will be used for a PNG athletic scholarship in Robert’s name (Robert DeRutte Scholarship Fund).