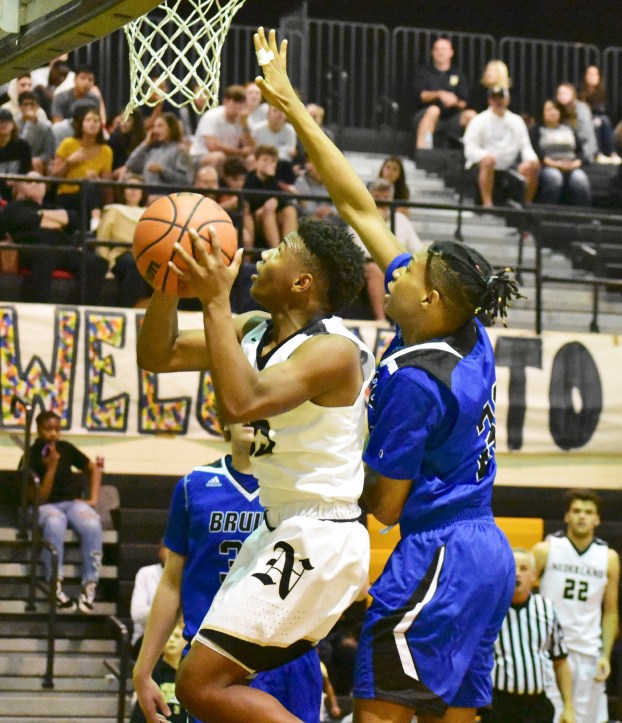 Cedric Pete of Nederland drives to the basket as Napoleon Adams of West Brook tries to block the shot Saturday in Nederland. (I.C. Murrell/The News) 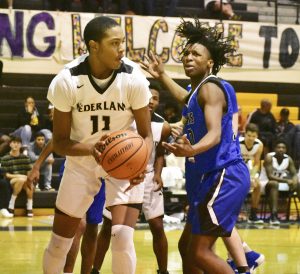 Tyler Jackson of Nederland spins off Ian Quiroz of West Brook during the second half Saturday in Nederland. (I.C. Murrell/The News) 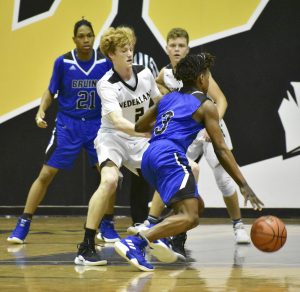 Hayden Hefner of Nederland pressures Ja’Quan Yates of West Brook during the second half Saturday in Nederland. (I.C. Murrell/The News) 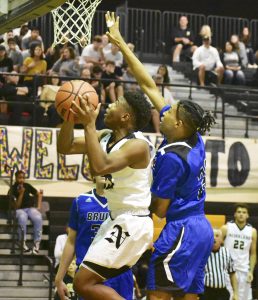 Cedric Pete of Nederland drives to the basket as Napoleon Adams of West Brook tries to block the shot Saturday in Nederland. (I.C. Murrell/The News)

NEDERLAND — Nederland has only won the Bulldog/YMBL Classic three times since its inception in 1971.

The last four years have been very good to the Bulldogs.

“We’re a hard-fighting team and we’re never going to give up, no matter who we’re playing,” junior forward Hayden Hefner said.

Hefner earned MVP honors and scored 32 points in a 61-54 win over West Brook, leading the Bulldogs a second straight tournament title and third in the last four years.

“They did a great job tonight,” Nederland coach Brian English said. “We really stepped up. Heck of a challenge from West Brook. By far, that was our best game.”

Nederland (7-2) repeated as Classic champion in a year where the school joined forces with the Young Men’s Business League, which had its own high school tournament for many years, to present this year’s event. The Bulldogs led by as much as 55-36 early in the fourth quarter, but English felt the lead was never safe against an Andre Boutte-coached team.

“I want to give my guys credit because they could have laid down,” said Boutte, who won five Bulldog Classic titles as Ozen’s coach in the 2000s. “They turned around and I asked them to take it one trip at a time. They cut it down to 10 and made a game of it, and we had it down to two or three right at the end.”

West Brook (8-2), which won the District 22-6A championship last season, closed the deficit all the way down to 57-54 with 34.6 seconds left. The Bruins tied the ball up on a Nederland inbound play, but Hefner responded with a steal and Cedric Pete sank two free throws to make it a two-possession game. West Brook missed a shot and turned the ball over one more time before Hefner closed out the win at the foul line.

“We definitely learned how to break a press better because that fourth quarter, they shut me down,” Hefner said. “They made it hard for us to get the ball in, and they made our job a whole lot harder.”

Nederland led 30-24 at halftime. English said the third period, which Nederland outscored West Brook 23-10, was the best quarter the Bulldogs played this season.

“We started shooting the ball well,” English said. “We took care of the ball, we got our teammates some open looks and we did a great job knocking down some shots in the third quarter.”

Ja’Quan Yates had 15 points and Peter Simon knocked down 13 for the Bruins.

Cedric Pete had nine points, while Bryce McMorris and Tyler Jackson each scored eight for Nederland, which will host West Orange-Stark on Tuesday. Pete and Jackson each made the all-tournament team.

Bossier Parish Community College was picked last in the East Zone of NJCAA Region XIV, but the Cavaliers have yet... read more