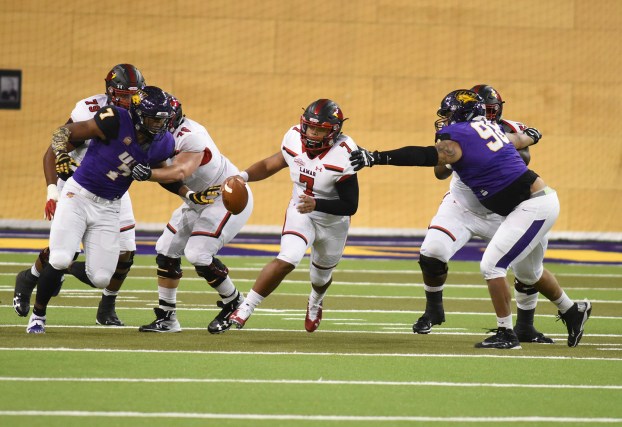 CEDAR FALLS, Iowa – Lamar came up just short in its NCAA FCS playoff appearance dropping a 16-13 decision at Northern Iowa on Saturday in the UNI Dome.

The Cardinals had two field goals miss their mark in the final 30 minutes, which wound up being the difference in a game that saw only three points scored in the second half.

“Like I told the team in the locker room, in a very short period of time you have learned to compete on a national level when no one else believed in you,” said LU head coach Mike Schultz. “Now we have to learn to win on a national level. I speak for our whole staff when I say I couldn’t be prouder of these guys. Northern Iowa is a great football team and we came up just a bit short.”

The Cards finished the day with 417 yards of total offense and outgained their hosts by 71 yards on the day. Senior Darrel Colbert Jr. led the offense completing 14 passes for 268 yards and two scores. Sophomore Myles Wanza led the ground attack with 14 carries for 85 yards.

It didn’t take long for the Cardinals to silence the crowd and create a trivia question for years the come. The first LU touchdown in FCS playoff history came on the second play from scrimmage as Colbert found sophomore Kirkland Banks down the far sideline and Banks turned up field untouched for 73 yards and the score. It took LU just 37 seconds to put points on the board.

Big Red proved they could score without the use of a quick strike on their next. The Cardinals marched the ball 75 yards down the field on 11 plays, which set up a 25-yard pass from Colbert to junior Case Robinson all alone in the back corner of the end zone for a 13-3 advantage. Colbert’s ability to scramble when the pocket started to collapse set up the play allowing Robinson to find a gap in the Panthers’ defense.

The Panthers appeared to answer right back with a 35-yard TD pass, but the play was negated due to a penalty and the Panthers were forced to punt it away, but the Cards couldn’t take advantage and punted it right back. After forcing the Cardinals to punt the ball away late in the first quarter, UNI put together a drive moving the ball deep into LU territory before the drive stalled and they were forced to settle for a 44-yard Austin Errthum field goal to trim the lead to seven, 13-6, with 8:16 remaining in the half.

The Cardinals held the advantage until less than two minutes remaining when Eli Dunne found Jalen Rima open down the far sideline for a 32-yard scoring strike to tie the game at 13. With less than a minute remaining in the half, the Cardinals went for the lead heading into the locker room, but Colbert’s pass was picked off in the end zone to send the game into the locker room all knotted at 13.

The Cardinals appeared to make the first big break of the second half. With UNI starting a drive inside their own 20, Dedrick Garner batted a pass in the air, which Chaston Brooks hauled in. Unfortunately, the Cardinals had to settle for a 42-yard field goal attempt, but it was pushed wide right. The Panthers took their first lead of the game with 13:09 remaining in the contest when Errthum booted a 35-yard field goal just minutes later.

Facing fourth-and-15 from their own 30, Schultz dialed up one of the gutsiest calls of his career. LU snapped the ball to Brandon Arnold, who rambled 23 yards – included breaking one tackle – to gain the first down. After a 28-yard completion from Colbert to junior Jawun Ruffin on the next play, LU appeared to be in business, but the Red and White coughed up the ball on the next play.

The Cardinals got the ball back late and drove it down the UNI 19-yard line to set up 36-yard field goal, but the kick sailed wide right. UNI’s offense was able to run the clock down under 30 seconds before punting it away, and their defense held to pick up the victory.

“I’ve never been one to blame an individual,” said Schultz. “We never should have put Elvin [Martinez] in that position. I believe Darrel Colbert will agree with me that that falls on the offense. We should’ve taken it down and got the touchdown.”

The Cardinals close out their historic campaign with just their second winning season since the program’s return (7-5), and just the fifth winning season in the past 30 seasons. (Lamar did not have a football program from 1990-2009.)

HOUSTON — The Port Neches-Groves Indians and the Lindale Eagles came out firing on all cylinders in the first half... read more