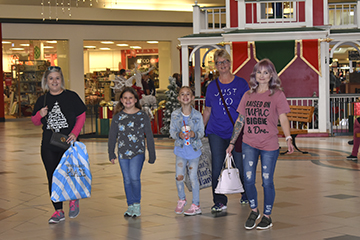 Whether hitting the stores early or waiting for the crowds to die down, Southeast Texans were on the hunt for deals on Black Friday.

One of those shoppers was Britni Hidalgo and her 2-year-old daughter Peyton.

“We slept in and started out at 9 a.m. and have been able to get all the deals we set out to get,” Hidalgo said while seated on a bench inside Central Mall.

“This is actually my first year to get out and shop on Black Friday and it wasn’t as bad as I thought,” she said.

Darlene Dawson and daughters Keeli Romero and Katie Ramsey and granddaughter Harlie and Maddie Ramsey made it a girl’s day out Friday. The group initially did a little shopping Thanksgiving night at a very packed Walmart, saying it went smoothly. Then, on Friday, they made a late start.

“I was able to get some good deals,” Romero said, adding she found Christmas gifts for her three children.

As the women spoke, the sound of Santa’s voice could be heard from the grand court area near TJ Maxx saying “Merry Christmas” as shoppers walked by.

Simply Chic on Nederland Avenue in Nederland had customers lined up outside the shop before owner Katie Meeks opened the doors at 8 a.m.

The store had the usual sales but it was the $10 pair of Toms shoes that brought many customers to the door.

“It was a rush but everybody was very nice to each other and people got in and out quickly,” Meeks said. “Those in the front of the line, at least, got what they wanted and we were almost completely sold out of the Toms by 9:30 a.m. We had about 200 pairs.”

The whole day saw a steady stream of customers and is the biggest Black Friday that Meeks has ever had in the 10 years she has been open.

Paige Hervey at The Collection in Groves also saw a good day of shopping.

“We had people waiting when we opened because we had a lot of specials this morning and people coming in all day, but not as many as the first (part of the day),” Hervey said. “You may have heard, there’s a football game going on at NRTG Stadium.”

The game she’s referring to is the Port Neches-Groves Indians’ playoff game scheduled for 8 p.m. while the Nederland Bulldogs will be in a playoff game earlier in the day Friday.

Black Friday falls on the Friday after Thanksgiving Day that is considered the beginning of the Christmas shopping season and is a time when businesses going from being “in the red” to being “in the black,” or making a profit.

NEDERLAND — Holiday shopping is in high gear and the “mom-and-pop” shops are hoping they make the consumers’ list. To... read more