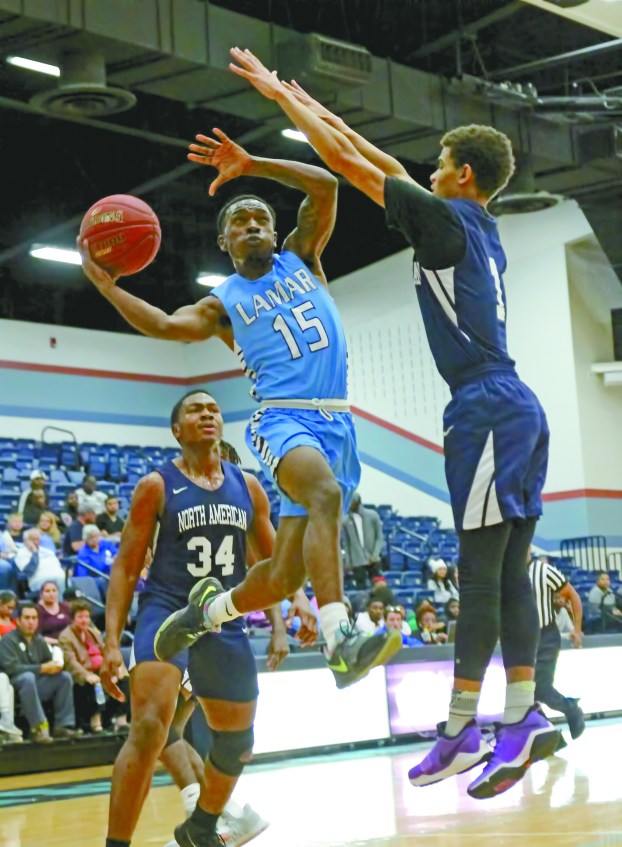 Lamar State College Port Arthur freshman guard Terrance Minor (15) goes up for a bucket against North American University as the Seahawks rolled over the Stallions 117-48 at the Carl Parker Center on Tuesday night. (LSCPA sports information)

Lamar State College Port Arthur showed its versatility on Tuesday night at the Carl Parker Center in a 117-48 pounding of North American University as Devaughn Thomas scored 19 and Javante Walker 18 to give the Seahawks their third consecutive win. The non-conference victory improves the Hawks’ record to 6-3 as they head into NJCAA Region XIV play on Wednesday, Nov. 28, at Tyler Junior College.

The Hawks reeled off their fourth largest margin of victory in school history with the 69-point win with Thomas picking up his second consecutive high-scoring game of the season. The freshman from Lafayette, Louisiana, scored 18 points with 10 rebounds against Lone Star College-Kingwood this past Saturday. On Tuesday night, he added seven rebounds, doing most of his scoring damage from the perimeter.

On the other hand, Walker, a 6-foot-8 redshirt sophomore from St. Martinville, Louisiana, had a team-best eight rebounds with two blocked shots as he camped out in the paint, haunting NAU as it tried to find an answer to the Hawks’ inside game.

The Hawks’ defense dominated the Stallions’ attempts at creating any offensive momentum, forcing 19 turnovers during the course of the game, compared to LSCPA’s 10 giveaways. The Seahawks outrebounded North American University 51-20. Terrance Minor led the Seahawks with seven assists, while NAU had eight assists as a team.