Jordan Hoy changed the quarterback battle at Lamar when he transferred in from Old Dominion.

Quickly moving into the top backup role behind Darrel Colbert Jr., Hoy eventually started some games while Colbert nursed an injured ankle. Hoy, a junior from Rockwall, rushed for seven touchdowns this season and was named the Southland Conference’s offensive player of the week in back-to-back weeks.

Now, Hoy is one of the Southland’s newcomers of the year, sharing the award with Abilene Christian running back Billy McCrary.

Lamar won two superlative awards from the conference, which announced its yearly honors Tuesday. Senior right guard Garrett Bowery is the offensive lineman of the year.

Hoy totaled 692 yards of offense in wins at Stephen F. Austin (where he rushed for 225 yards) and Central Arkansas and won weekly awards from the Southland as a result. He also started Lamar’s home finale, a win over Houston Baptist.

He has completed 40 of 67 passes for 654 yards and six touchdowns with two interceptions. Hoy also rushed 81 times for 516 yards and seven TDs.

Bowery, a senior who transferred for the 2017 season from Kilgore College, anchored an offensive line that helped spring Lamar’s Southland-leading rushing attack. The Cards’ 250.3 yards per game ranks 12th nationally. 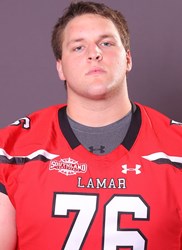 The Cardinals placed three on the All-Southland teams: weak-side safety Davon Jernigan and Bowery on the first team and defensive right end Daniel Crosley on the second team.

Jernigan, a senior from Navasota, picked off four passes, including one returned for a touchdown, and was one of six Southland players with more than 100 tackles on the year with 103. Crosley, a junior from DeRidder, Louisiana, sacked quarterbacks eight times and made 15 tackles for losses.

“I’m very excited for each of these young men,” Lamar coach Mike Schultz said in a release. “Most people only get to see them on game day, so they never get to see the hard work they put in during the offseason, in weight room and film study, but as a coach I got a firsthand look. They committed themselves to getting bigger, faster and stronger. It was great to see that hard work pay off on the field, and now for it to be recognized by the other coaches and media relations directors in the league.”

McCrary’s 8.2 yards per carry led the Southland. He totaled 10 touchdowns passing and rushing.

The issue was finally settled on the basketball court. Nate Clover had 23 points to lead four Memorial players in... read more