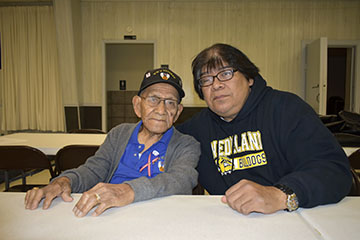 World War II veteran Patrick Aguilar, left, and son Glenn Aguilar pause for a moment to talk about the elder Aguilar’s time in the Army Air Corps 9th Division during a special program put on by Our Lady of Guadalupe Senior’s Club and held at the Nederland Knights of Columbus Hall on Monday. Mary Meaux/The News

Aguilar, 95, is the last of five brothers who served in the military: Santos Aguilar, Frank Aguilar, Raymond Aguilar and Ignacio Aguilar were the others.

He and other veterans were honored for their service during a special program put on by Our Lady of Guadalupe Senior’s Club and held at the Nederland Knights of Columbus Hall. 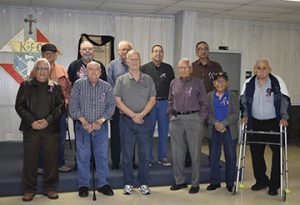 Veterans who are members of Our Lady of Guadalupe Senior’s Club pose for a photo during a special program held at the Nederland Knights of Columbus Hall on Monday.
Mary Meaux/The News

Like many WWII veterans, Aguilar jumped at the chance to enlist to fight for his country. He has shared some of these stories with family and when he and his son Glenn watch war movies together the son asks the father about specifics, wondering if this is what it was like for the elder Aguilar while serving overseas.

An 18-year-old Aguilar learned his friend, whose last name was Orta, was going to enlist in the military. Aguilar told him to wait for him because he was going to the movies first.

“Hey, wait for me. I’ll go with you,” Glenn Aguilar said of the story his father told.

And he did. Aguilar enlisted before he graduated from Thomas Jefferson High School. Later, Aguilar’s wife was instrumental in him getting his high school diploma.

Patrick Aguilar served from around 1942 to 1945 then went back as a reserve for one year.

“My mom told him you have two little girls at home,” son Glenn Aguilar said.

Aguilar’s family has chronicled some of his military experiences:

The next morning we went to Cherbourg, France, where they were building an airfield. At night we could hear cannons going off.

A Jeep with two men went down the street with a machine gun mounted on the Jeep and as they started to fire, the gun jammed. Fortunately, the German plane kept on going and “we were saved from any fighting.”

Glenn Aguilar said he often asks his dad details when watching movies and learned that next to the tents in Cherbourg there was a trench the airmen could roll into and grab a rifle, if needed.

According to the National World War II Museum, about 496,777 of the 16 million Americans who served in the war are alive in 2018. About 348 of these veterans die every day.

Port Arthur police Monday confirmed that a second suspect — a juvenile — has been arrested in connection with the... read more