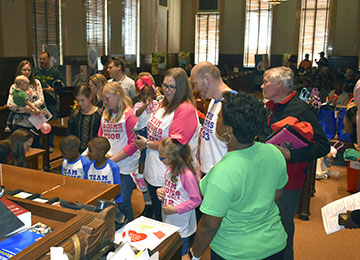 The Grooms family stands before Judge Randy Shelton during the adoption of Carlee, Elijah and Ezekiel on Friday at the Jefferson County Courthouse in Beaumont. Mary Meaux/The News

BEAUMONT — Twenty children were welcomed into the open arms and hearts of 14 new adoptive families amid applause and well wishes Friday.

There were families such as that of Wilma Banks — who already has three grown children — who adopted Aaron, 9. She began fostering him since last November. She said it has been a long, hard road but they have made their way through it.

“This means a lot to us,” Banks said while sliding a glance toward her new son. “It’s been a long, hard struggle but we’re ready to face the world now.” 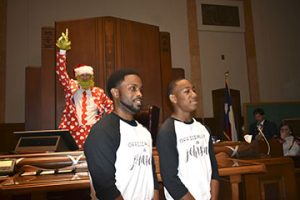 Charles Johnson Jr., left, stands next to his newly adopted son Kenny as Judge Randy ‘Grinch’ Shelton, back, strikes a pose on Adoption Day on Friday at the Jefferson County Courthouse in Beaumont.
Mary Meaux/The News

Some families wore matching T-shirts with family names on them such as Charles Ray Johnson Jr. and his newly adopted son Kenny Ray Johnson, 14.

Their shirts touted “Officially a Johnson” with Friday’s date on the back. The father-son duo also wore matching white dress shoes.

Charles Johnson Jr. is a teacher and coach at Vincent Middle School in Beaumont and his son is a student in the school district.

Then there was Stephanie and Albert Carter Jr., who added Zoey to their growing family. 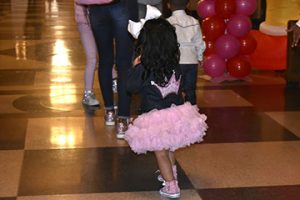 Zoey walked toward her family and parents Stephanie and Albert Carter Jr. after her adoption Friday at the Jefferson County Courthouse in Beaumont.
Mary Meaux/The News

“I am grateful, thankful and blessed,” Stephanie Carter said of the tot who was dressed in a fluffy pink dress. “She’s a little princess and we welcome her into the Carter kingdom.” 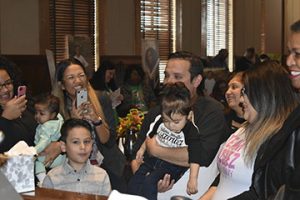 The Vasquez family stands before Judge Randy Shelton during the adoption of Selina on Friday at the Jefferson County Courthouse in Beaumont.
Mary Meaux/The News

Judge Shelton said National Adoption Day has become an institution and is in its 19th year; Jefferson County has been part of it for 18 years.

National Adoption Day is a collective national effort to raise awareness of the 117,000 children in foster care waiting to find permanent, loving families, according to information from the court.