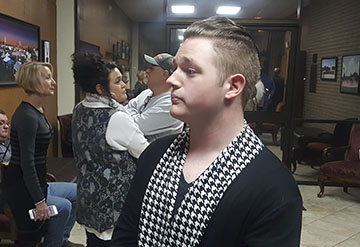 The council was set to fill the vacancy during a special meeting Thursday but Mayor Brad Bailey said he received some late letters from residents regarding the post. He also wanted council to consider a request made by resident Michael Campise, who suggested Suzanne Williamson for the spot.

Campise said there is a divide in the city and said he hoped the council would show transparency and work to begin to change people’s perception of the council. He added that Williamson, who withdrew from a runoff against the mayor after trailing by 101 votes to Bailey in Nov. 6 voting, did not know he would speak. He also said he did not know if she would be willing to serve if appointed.

He added that placing Williamson in the seat would do a lot to bridge the gap and a lot of people voted for her — “This would stop a lot of the negativity,” Campise said — as part of the room erupted into applause.

Coburn also took to the podium and addressed councilmembers and those he called bullies.

“If this whole process has taught me one thing it is that despite lies, rumors and intolerance, we as Americans and Texans who value our freedom of speech and fair judgment above all others will always have the right to stand up to tyranny,” Coburn said. “I’ve admitted my wrongdoing from day 1 and apologized for my judgment but never will I apologize for simply being human. Now if the grown men that are still on this council will admit theirs, this city may be able to finally heal this division.”

Coburn remained critical of the petition that held discrepancies of some signatures including, he said, fraud and forgeries.

“It (petition) was anointed by its own and manufactured by a select few who have a fervent need to hold power,” he said. “Why would someone who has been in office for almost two decades be afraid of change — afraid of any who would stand up to the status quo? Why would the bullies not learn as they age and why would they be concerned that the bullied gain some representation? This fight is far from over; these small-minded men will never be able to take away our voice and will soon find, as the Supreme Court Justice Brandeis famously said, ‘Sunlight is the best disinfectant.’”

The openly gay Coburn came under fire after nude photos of him that he shared with a person he met on Grindr, a dating website, were sent to City Hall and to local news media anonymously, asking if this was proper behavior for a city councilman. He believes he was “catfished” — or lured by a person using a fake identity. The photos were not published to the internet, only between Coburn and the person he met through the gay dating app.

But some Groves people were not pleased to hear of the issue they called morally wrong.

There was a meeting between Coburn and his attorney, a representative of the city’s human resources office, the mayor and police in which it was deemed that nothing illegal had occurred.

The longtime mayor, Brad Bailey, said at that time Coburn’s actions were unbecoming of a public official, regardless of age.

Groves resident William Lane Howlett came forward with a petition to recall Coburn from his seat and later a recall election held during the General Election. The issue of the legitimacy of the signatures and the petition was brought to court and District 172 Judge Donald Floyd ruled in favor of the city, allowing the election to move forward.

Groves councilmembers are set to name a replacement for Coburn’s seat at an upcoming meeting.