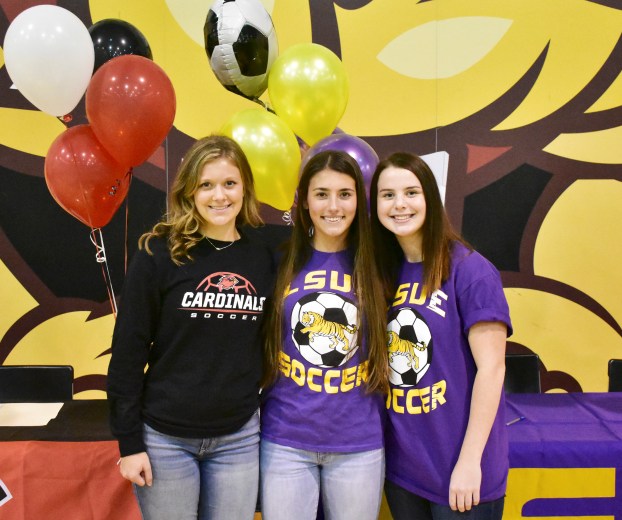 Sheppard had been verbally committed to Lamar since her sophomore year, when coach Steve Holeman took over the program.

“… Once I saw what they did last year and this year, that made me excited to see what I can do to help,” the striker said. The Cards won the Southland Conference tournament last fall.

Now, she’ll join a roster that boasted three Jefferson County players and one from Lumberton.

“I used to play with some off the girls,” Sheppard said. She’ll join Nederland graduate and 2017 Southland Conference tournament MVP Madison Ledet, as well as Port Neches-Groves alumna Hailey Loupe and Kelly graduate Sophia Manibo, all of whom are sophomores at Lamar. Lumberton’s Macie McFarland is a junior.

“I just felt at home, much different from all other places,” said Miguez, who said she was offered by Lamar. “I’m very excited because I’d have been scared and nervous to go to a new team without someone I’ve known.”

That won’t be the case with Short joining her.

“We made up our minds at the same time,” said Short, who drew an offer from Northeast Texas Community College.

The signing ceremony was exciting for Nederland coach Aaron Tomplait, who led the Bulldogs to a share of the District 22-5A championship last spring in his first season at the helm.

“I never had to organize something like this,” he said. “I really just had a year with them. I don’t know what my impact is, but hopefully they picked up something from me for next season. We all have high expectations.”

If JaVontae’ Hopkins isn’t given the ball, the Memorial senior just might take it. Hopkins the cornerback earned his fifth... read more