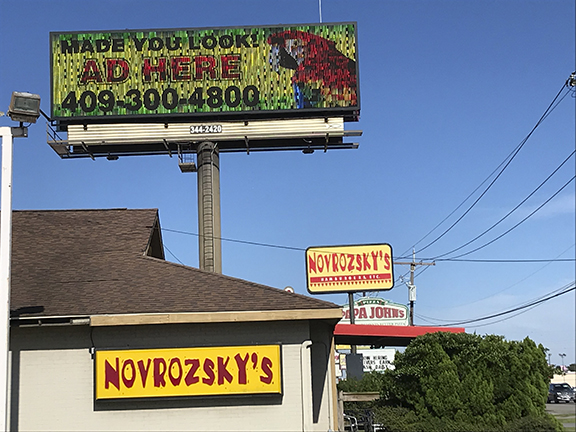 This billboard on Highway 365 in Nederland generated interest in a tougher sign ordinance. (Ken Stickney/The News)

NEDERLAND — Nederland City Council has updated its sign ordinance after some controversy generated over a sexually suggestive advertisement that ran last month on an electronic billboard on Highway 365.

The billboard ad showed a woman lying on a table with her legs open towards the background and read “Insert your ad here” with a contact for a local number.

City Manager Chris Duque said the city’s book of ordinances did not have anything regulating the content placed on a billboard before this week’s City Council meeting, which was held Monday.

“A couple of years ago, we updated the provisions for the ordinance to include billboards,” Duque said. “That includes the location and the zoning. We had gotten a complaint about here being too many billboards and them being stacked up on each other. The billboard section addressed how far apart they were, the height requirements and things like that.”

Duque said after the picture of the billboard circulated council members realized they needed to add to the ordinance.

“The city clerk has an association where they can ask about ordinances and find out how to go about certain ordinances,” Duque said. “They’ll pass around policies and ordinances that they have. That’s how we get a lot of stuff. A lot of cities had the same language so we put that into ours.”

Duque said they ran the ordinance by the city attorney to make sure they were within their rights since it required regulating content.

“You have to make sure you are balancing the First Amendment,” Duque said. “(The attorney) said it would pass the test if it were challenged.”

The new ordinance would allow the city to fine a company and remove the ad if the city manager deems it to be inappropriate.

The city manger said he was surprised there wasn’t an ordinance in place regarding billboard content already.

The ordinance change will become official after it is published within the next few days.