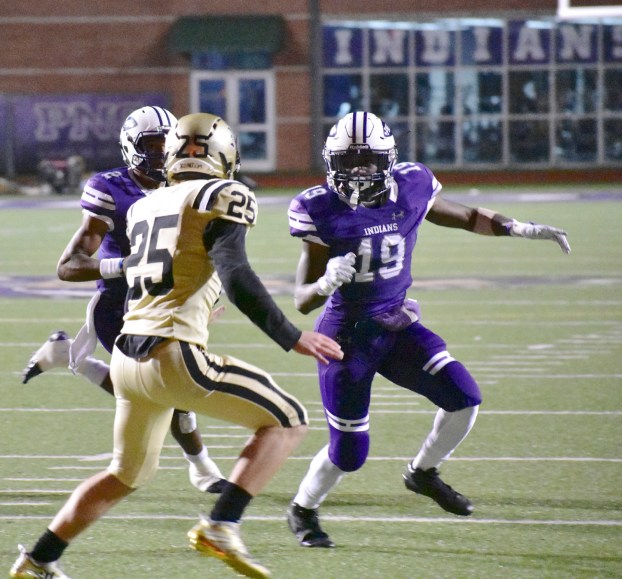 Jaylan Williams of PNG provides lead blocking for quarterback Roschon Johnson, hidden behind Jordon Huckabay (25) of Nederland, in the red zone during the second quarter of the Bum Phillips Bowl on Friday in Port Neches. (I.C. Murrell/The News)

FOOTBALL: Moving past the Madness: Indians prepare for playoff game at The Reservation

PORT NECHES — Coming off of a dominating 34-21 win over Nederland in the Bum Phillips Bowl, the Port Neches-Groves Indians get ready for their first playoff game against the Houston Northside Panthers.

“I think (allowing home games) is awesome,” head coach Brandon Faircloth said. “It saves you the trouble of having to find a neutral site. To host, is really exciting. PNG hasn’t hosted one since 2007. To get an extra game on the home turf is a big deal and we are really excited about it.”

“We have to refocus,” Faircloth said. “We ‘ve had to do that every week, though. It was a big win for us, but Northside doesn’t care. They don’t know what Mid-County Madness is. It’s a playoff game there is a lot on the line. If you win, you get to stay in. If you don’t, you have to turn your stuff in.”

The PNG defense stepped up towards the backend allowing an average 18 points per game over the last three games of the season.

“We tell them all of the time the easiest way to win games is to play great defense,” Faircloth said. “They’ve bought into it. They do their job and care about each other. Our defensive staff had a great game plan every week and our kids did a great job of implementing it. It makes is easier on the whole team when you play great defense.”

The Indians finished second in the district in total defense (second in passing and third in rushing) behind only Nederland.

Senior quarterback and University of Texas commit Roschon Johnson also played a large role in the Indians win over the Bulldogs. Johnson carried the ball 35 times for 258 yards and five touchdowns. Faircloth said the coaching staff tries to go into each game with a balanced attack but ultimately takes what the defense gives them and likes to keep the ball in Johnson’s hands.

“Every game plays out differently,” Faircloth said. “Sometimes you have to throw it a bunch. Some of the situations dictate that we need to have the ball in his hands in that situation. It’s just how it played out. We’re going to do whatever it takes to win.”

The Panthers are coming off a 65-7 loss to undefeated Fort Bend Marshall (10-0, 8-0 in 11-5A-II). Northside brings in their district’s fourth-ranked defense and fifth-ranked offense.

Kick off is set for 7:30 at The Reservation on Friday.