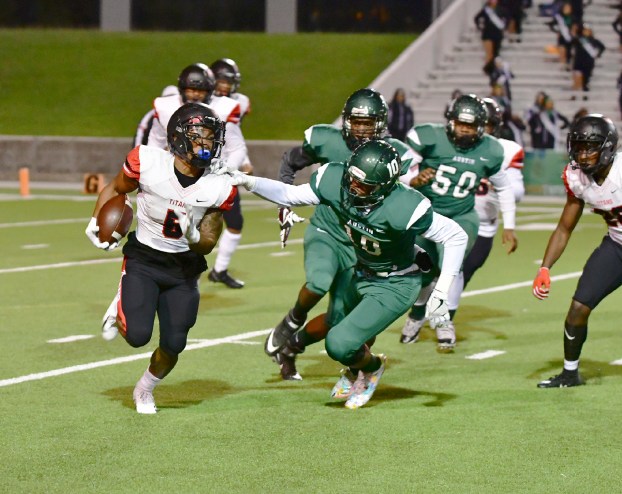 JaVontae’ Hopkins of Memorial ran for 217 yards and three touchdowns against Austin on Friday night at Delmar Stadium in Houston. (Jereem Augustine/Special to The News)

If JaVontae’ Hopkins isn’t given the ball, the Memorial senior just might take it.

Hopkins the cornerback earned his fifth interception of the season in a blowout of Houston Austin last Friday. He returned two for 100 yards and a touchdown each and took back another 68 yards for a score earlier this season.

But first-year Memorial head coach Brian Morgan knew when he was offered the position that Hopkins the running back could just be as effective. Hopkins hasn’t disappointed, going for 449 yards and seven touchdowns the past three games. He now has 517 yards and eight touchdowns on 40 touches (12.93 yards per carry).

“He’s got a lot of tools,” Morgan said. “Everyone in Port Arthur knows about JB [Hopkins] and has known about him for a long time. It’s not surprising to anybody around town. You go to a Pop Warner game, and people talk about him. They’ve seen him since he was young doing the same thing.”

In two of those games, Hopkins ran for exactly 217 yards and three TDs each, against Kingwood Park and Houston Austin, almost gaining all of his yardage before halftime. That has made his senior night against Houston Wisdom — 55-yard punt return and a 15-yard touchdown on his only carry — seem like short work.

“We thought in the springtime JB was going to be good with the ball in his hands and thought he was going to play some offense,” Morgan said. “He just had a really good career returning kicks, so we knew him carrying the ball, we had a chance to be pretty successful. Obviously you can’t expect that all the time, but it’s good to see.”

Hopkins is expected to start in the backfield for the fourth straight game with sophomore Branden Chaney still nursing an undisclosed injury. Hopkins hadn’t played running back regularly since his freshman year, but former Titans coach Kenny Harrison would work him out at that position in practice behind Elijah Hines.

“Coming back to running back, it was nothing new,” Hopkins said. “We were already talking about it. … Once he put me back there, I could make some plays.”

The UIL is breaking away from tradition (at least for the bi-district round) and allowing higher-seeded teams in both 5A divisions to host playoff games. That means all of Jefferson County’s three teams in the classification — 12-5A-II co-champions Port Neches-Groves and Nederland included — will be home for the playoffs.

“There was a study done last year for the 6A level last year, and they trickled down to our level,” Morgan said. “It kind of got passed down to next year for 4A and 3A. I think it’s a good deal. It makes sense. It makes the regular season worth it a little more. Playing for the home field, especially when you have an atmosphere like ours, I’m excited to be playing on Friday night. Somebody’s got to come to our place. We’ll have a good atmosphere.”

Neutral sites will be used starting with the area round in 5A.

Morgan, who graduated from Thomas Jefferson High in 2001, said it’s been at least 25 years since Port Arthur last hosted a playoff game.

Said Hopkins: “It’s great for our fans. Our fans hadn’t seen it in so many years, so when we have a home game here, it’s going to be sold out.”

Hopkins said he’s heard the talk in the Memorial High School halls about playing a sixth home game this year.

“Everybody’s been talking about it all day,” he said Tuesday morning. “I just came from out the schoolhouse. They’re going to talk about the game the whole week.”

Foster, in the Lamar Consolidated ISD, secured third place in the district with a 21-20 win over Fort Bend Hightower, which needed an Angleton win over Friendswood to slide into the playoffs. Alvin Shadow Creek and Angleton took the top two seeds, both having beaten Foster.

Foster junior Ryan Stubblefield has completed 60.1 percent of his passes (125 of 208) for 1,786 yards and 20 touchdowns with four interceptions, second only to Shadow Creek’s Jamarian George in 10-5A-I in both yardage and TDs. Senior Shadeed Ahmed (55 catches, 746 yards, nine TDs) leads 10-5A-I in all receiving totals, and senior Jaden Smith (17 punt returns, 272 yards, two touchdowns; 11 kick returns, 321 yards, one TD and four interceptions for 20 return yards) is a defensive and special teams threat in his own right.

“They’ve got a pretty good team on both sides of the ball,” Hopkins said. “We know they’re going to play, so we’ve got to bring our A-game, really. We like playing against teams like that. They give us a challenge.”

Hopkins was not listed in return specialist categories for 9-5A-I, but he’s proven dangerous in that phase, just as he has on offense and defense.

“They don’t kick it to him very often,” Morgan said.

The Falcons will have to protect Stubblefield against a Titans defense that has totaled 47 sacks this year, let alone worry about the backfield. Junior Jatavian Neal, a backup running back, also has three interceptions to his credit, as does senior Jaylen LaPoint.