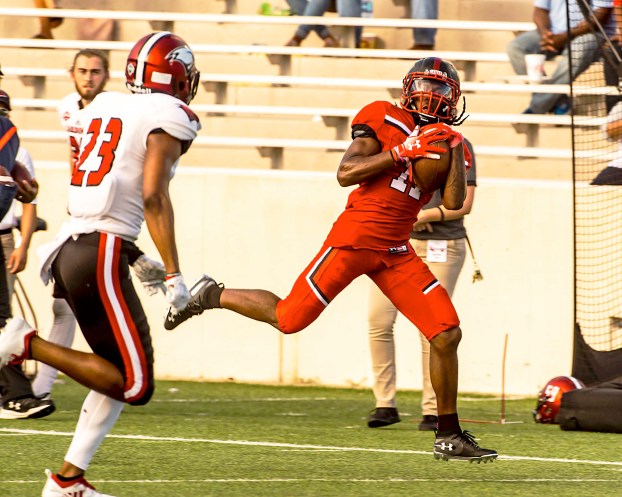 Before Lamar took the field against Incarnate Word on Sept. 29, contending for a Southland Conference championship might have fleeted the Cardinals’ minds.

They were mired in a four-game losing streak, having narrowly missed out on two conference victories at home. Since Mike Schultz’s arrival after the 2016 season, his message to the Cards was to “stay the course.”

The course needed some breaks, and Lane Taylor and Caleb Abrom came through with the first of them.

Taylor’s field-goal block led to Abrom’s 66-yard return with no time left, and what could have been a 24-21 Incarnate Word win became a 27-21 Lamar victory that made SportsCenter highlights. Lamar (5-4, 4-3 Southland) hasn’t lost since, beating two nationally ranked Southland contenders in the process, then-No. 14 Sam Houston State and then-No. 19 Central Arkansas.

One more win Saturday against Houston Baptist, and Lamar will not only have its first winning record since 2014 (8-4) but also extended its winning streak to five for the first time since 1972. The four-game streak is the longest since 1979.

And UIW? Those Cardinals (5-4, 5-2) are tied with now-No. 17 Nicholls State and No. 18 McNeese State for first place in the conference. Lamar is one game behind, tied with Central Arkansas, Sam Houston State and Abilene Christian (which Lamar does not play this season) with a visit to McNeese remaining after Saturday.

Not bad for two Cardinals teams picked to finish ninth (UIW) and 10th (Lamar) in the 11-team Southland.

“We’re in a lot of first-time areas,” Schultz said. “… But what we’ve got to do is stay focused on the next job, and the next job is HBU.”

SOUTHLAND OUTLOOK AND PLAYOFF HOPES
The Southland on Thursday clarified how an automatic qualifier for the NCAA Division I playoffs could be determined should a similarity in conference records arise after next Saturday’s games.

Incarnate Word is the only Southland team to play eight league games. Since 2015, one team has been scheduled to play eight in a season, while the other 10 teams play nine each. This was done because of the conference’s desire to have teams play nine games, but the math involved only allowed 10 teams to do so.

Southland Commissioner Tom Burnett said the league is considering going back to eight games for everyone after the 2020 season.

UIW has one league game left at Central Arkansas. If UIW wins and remains the only two-loss team after next Saturday’s slate, those Cardinals will be the Southland champion and receive the automatic berth.

There can still be a shared championship, Burnett said.

“The tie-breaker begins with head-to-head comparisons, then moves [to] results against common opponents,” he said. “There are also differences if there are two-way or three- or even four-way ties that can get fairly complicated.”

ABOUT HOUSTON BAPTIST
Schultz is hardly thinking about Lamar’s playoff prospects. He has two chances to finish with a winning season, starting Saturday at home against Houston Baptist (1-8, 0-7).

The Huskies are averaging better than 30 points and 400 yards of offense per game, but coach Vic Shealy’s team has not won since a season-opening 49-7 win over Southwest Baptist of Missouri. Their closest defeat this season is 31-28 at Northwestern State on Oct. 27.

SENIOR DAY
Twenty Lamar seniors are expected to take the Provost Umphrey Stadium field for the final time. Quarterback Darrel Colbert Jr., who hasn’t played since an Oct. 20 home win over Sam Houston State with an ankle injury, was listed as questionable.

Sophomore tight end Mason Sikes has been ruled out.
Lamar has been selling two reserved tickets for $20 in honor of senior day, which is also themed Veterans’ and Military Appreciation Day. The Cards have averaged 6,886.8 fans this season, with a season high of 8,017 against Southeastern Louisiana on Sept. 22 (30-24 SLU victory). The SHSU game drew 7,227.

“I think our fans have outstanding, and I look forward to keep fostering the relationship we have with our fan base,” Schultz said, his program looking for only its second winning season since it was relaunched in 2010. “It’s going to continue to grow. You know, when any relationship has been damaged, it takes a little bit of trust, consistency to start rebuilding that relationship. I don’t think there’s any doubt that’s where we are.”
•
I.C. Murrell: 721-2435. Twitter: @ICMurrellPANews