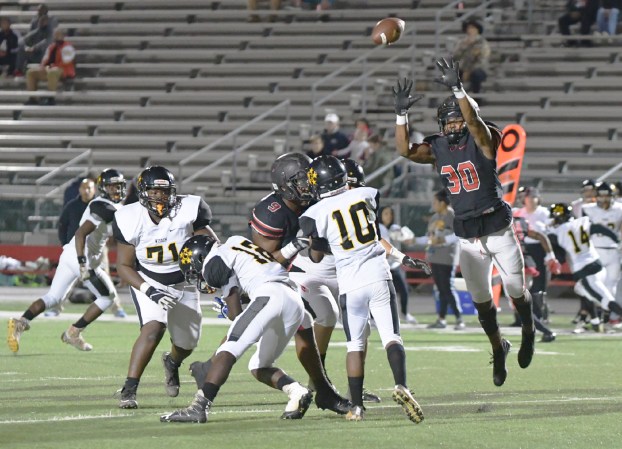 Lazarus May (30) has totaled 11 of Memorial’s 43 sacks this season. (Jereem Augustine/Special to The News) 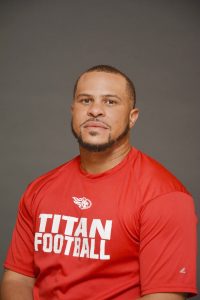 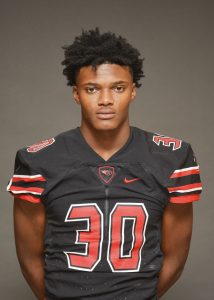 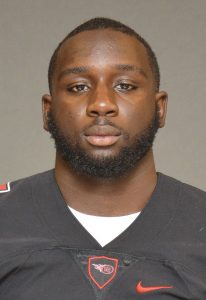 Linebackers are usually considered quarterbacks of their defense. Memorial senior linebacker JaQuaylen Crook speaks — and plays — the part quite well.

“I communicate with them every single play, every down, every day in practice,” the senior said. “Gotta keep the boys focused.”

Crook finds ways to fly to the ball. With 37 solo and 37 assisted tackles, his stats are nearly identical to classmate Chris Thomas (35 solo), who lines up alongside him on the strong side.

But just as a quarterback relays plays to his backfield and front line, Crook’s communication is key to a unit that leads District 9-5A Division I in total defense. Not to mention one that harasses quarterbacks and takes away their targets.

Crook, at 5-feet-10 and 195 pounds, is just 2 inches taller than 210-pound Thomas and 180-pound cornerback and all-purpose standout JaVontae’ Hopkins, but the two linebackers can get the attention of linemen like 6-3 Lazarus May and 6-2 Da’Juan McMillan in practice and during the game with communication.

“He’s an actual stud,” May said of Thomas. “He’s a monster. He might be short, but he comes with a lot of power.”

If that isn’t impressive enough, senior defensive end May has 11 sacks and made 20 tackles for losses. He’s a big reason why the Titans total a remarkable 43 sacks on the year.

“We all play together,” May said. “We play hard every day in practice. We try to practice hard and make it a lot of competition. When we go into the game, it’s really like a practice to us.”

As for that standout secondary, Hopkins has returned three of his four interceptions for touchdowns (two of them going 100 yards each) and classmate Jaylen LaPoint has picked off three.

Yet, Memorial hasn’t yet peaked on defense, according to its first-year coordinator, Korey Mangum.

“Basically, it’s understanding all the little details we’ve got to fix, because that’s big.”

Crook also praises the line — just like a quarterback would his front five.

“I have an amazing d-line in front of me,” he said. “So, every day in practice I just focus on being the best me I can be in my spot and trying to take over the defense as a captain. With those big guys in front of me, it’s all fun and games every Friday night.”

While he makes plays, Crook also has a line than can keep the opposition from getting to him, much like an offensive front.

“I never get touched,” he said. “Fridays, wide open. They’re there every game.”

Memorial can still earn a share of the 9-5A-I title Friday with a win over Houston Austin (4-5, 3-3) at Delmar Stadium AND a New Caney (8-1, 6-0) victory over Porter (6-3, 4-2), but cannot earn the No. 1 seed. All but Austin have qualified for the 5A Division I playoffs, which will begin next Friday, with Kingwood Park (6-3, 4-2) sitting third. Even if a tie for third place existed, Austin would be the odd team out because it lost to both KP and Porter.

The Titans next Friday will host either Richmond Foster or Fort Bend Hightower, which played Thursday. The winner of that game will earn the third seed from 10-5A-I. Foster has already qualified for the playoffs.

NEDERLAND — One of the oldest clichés in sports says one can throw away records when two rivals play. Last... read more