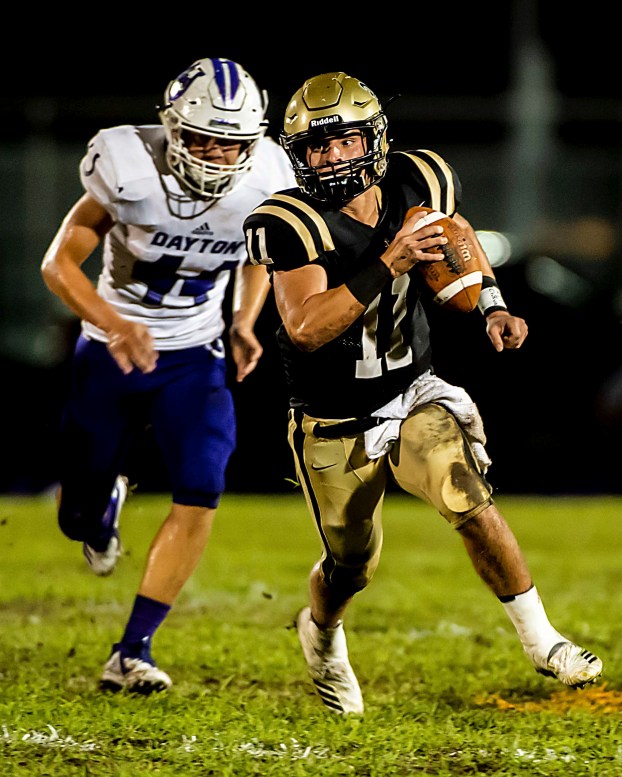 Blaysin Fernandez is going for his second straight Bum Phillips Bowl victory as Nederland’s quarterback. (Brian Vincent/Special to The News)

NEDERLAND — One of the oldest clichés in sports says one can throw away records when two rivals play. Last year, the undefeated Port Neches-Groves Indians entered the Bum Philips Bowl road game against the two-loss Nederland Bulldogs. A last second 36-35 upset by the Bulldogs handed the Indians their only regular season loss.

Lightning forced the Bulldogs to cancel outdoor practice Wednesday. The Bulldogs were upbeat as music played loudly and players sang along while going through their weight lifting.

“Their work week is Monday through Wednesday and some Thursday,” Nederland head coach Monte Barrow said. “They have a lot of other stuff going on. This isn’t the NFL, where this is the only thing they are doing. They have to be able to enjoy being a student, especially this week. It’s spirit week here, but they’ve been loose all year.”

Bulldog senior defensive lineman De’Sean Somersall said the team is well aware of how talented the Indians are.

“We’ve been growing more week-by-week as a unit,” he said. “I would say that we know how to make up for each other’s mistakes.”

At the beginning of the season, Barrow said his team would have to gel on the go because the front seven lost so many seniors from the previous season. Somersall said the team came together quickly thanks to the coaches.

“The coaches really bring us together,” Somersall said. “We are able to click because we spend a lot of time together. We don’t have any problems with each other. We have fun on and off the field together.”

Somersall moved to Nederland from Florida for his freshman year and was unaware of the intensity of the Mid-County Madness rivalry.

“At first, I really didn’t understand it,” he said. “I was told about it my freshman year. Over the years, I’ve come to understand what this means to so many people for so many years. I used to think it was another football game, but I realize that it is me and my brothers fighting to win.”

The defensive lineman said finishing the regular season with a prefect record would be something he would never forget.

“It would mean everything,” he said. “I just really want to go undefeated. I’ve made Texas my home and I’m glad to call everyone in that locker room my brother.”

Bulldog senior quarterback Blaysin Fernandez has lived in Nederland his entire life and said a win on Friday would be special.

“It’s something that we will all hold together,” Fernandez said. “It’s all about brotherhood. We try to live up to that. Growing up, (this rivalry) is all you ever hear about. This is what you look up to — your senior year, playing in the biggest game of your life.”

Fernandez said he is aware that PNG will be looking for a revenge game and hoping to spoil the Bulldogs’ perfect season this year.

“It’s definitely something I’ve been thinking about,” he said. “As long as we have our best game, I trust everyone and know that they’ll do right. If we can do that, I know we’ll have a good outcome.”

Fernandez has also been plagued by injuries this year, finishing only a handful of games.

“I’ve been trying to come to treatment and getting my body back to 100 percent after every game,” he said. “Playing high school football, it’s hard to stay up there.”

Nederland has maintained their spot as the district’s top defense all year. On Friday, The top defense will play one of the district’s best athletes in PNG quarterback Roschon Johnson. Both Barrow and Somersall said they trust the defense and know it will take an entire team effort.

“We have great athletes on our defense,” Barrow said. “This is definitely no disrespect to them, but if we try to go one-on-one with Roschon, he’ll beat us.”

“We put in work as a unit to contain him,” he said. “We know how talented we are. We’re not trying to get big heads, We know they could be the better team that night and beat us. We also know that in our hearts we are the better team.”

Kickoff is set for 7:30 p.m. Friday at The Reservation.

The message was very clear on Memorial’s warm-up shirts — Port Arthur vs. Everybody. And as the season wore on,... read more