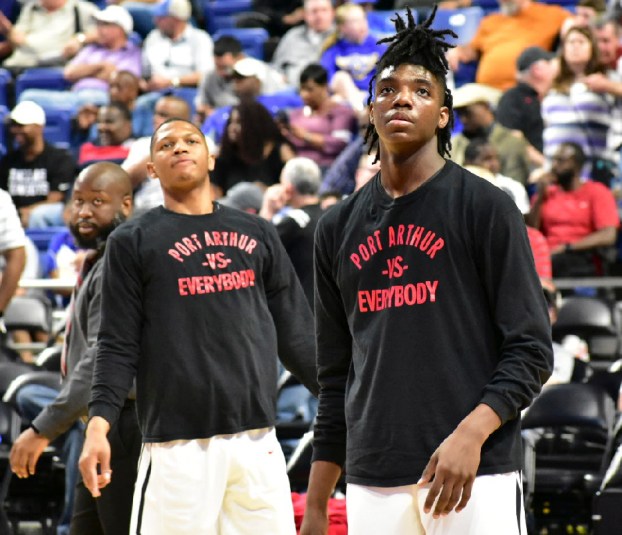 With 5A state tournament MVP Darion Chatman (left) and other 2018 Memorial seniors gone, center Nate Clover is tasked to step up in the Titans’ pursuit of a repeat. (I.C. Murrell/The News)

The message was very clear on Memorial’s warm-up shirts — Port Arthur vs. Everybody.

And as the season wore on, nobody had an answer for Port Arthur.

A very experienced Titans team brought their city its first state basketball championship in 23 years. But nine seniors from that 34-5 team (14-0 in District 22-5A) have graduated, and the architect of Memorial’s first title team, Kenneth Coleman, took a job at Humble Summer Creek to be closer to his residence.

Now, it’s the Alden Lewis show, and the member of Memorial’s first graduating class (2003) is trying to make the Alamodome the stage for the final act of the 2018-19 season.

“[I anticipate] basically seeing how this team responds to the success that the program has last year and building on that,” he said.

Lewis was the first varsity assistant in each of Coleman’s three seasons at the helm. He’s charged with identifying the key role players who can give the Titans the best shot at a repeat in UIL Class 5A boys basketball.

“Guys stepping up and taking on new roles on the court and from a leadership aspect as well,” Lewis said, asked what his team has to improve on.

It’s a tuneup fit for a big non-district schedule that includes a Nov. 16 home game against two-time defending 4A champion Silsbee (which will likely be rescheduled due to Memorial’s football playoff) and 4A contender Hardin-Jefferson. Memorial will compete the next two seasons in 21-5A.

Consistency in practice and in games will help the Titans reach their highest goals, Lewis said, among other things.

“Executing on both ends of the floor,” he said. “Taking it one game at a time and learning from each one throughout the season.”

But the Titans are bringing back their big man from the championship team, 6-foot-8 junior Nate Clover. Senior guard Jaden Conner (6-2) has logged plenty of varsity minutes as well and will look to feed Clover the ball on the low blocks as well as score from the outside.

“This year’s team is very hungry and ready to take on the challenge of defending a state title,” Lewis said. “They know what hard work looks like and are willing to do what it takes.”

The plan during the Titans’ title run was to get the players to believe they would win state, Lewis has said in recent interviews. That mission was accomplished.

A new one begins Saturday, when the Titans — who finished last season with 26 straight wins — open the season against Concordia Lutheran at Aldine Campbell High School.

“This year’s team is very hungry and ready to take on the challenge of defending a state title,” Lewis said. “They know what hard work looks like and is willing to do what it takes.”

Last season’s 5A playoffs were the tournament of the Titans, but Nederland nearly stole the show in the bi-district round.

Three up-close shot attempts would not fall through the net before the buzzer, denying the Bulldogs an upset of heavily favored Humble in the bi-district round. Humble went 18-0 in the old 21-5A.

But junior guard and University of Houston oral commit Hayden Hefner (6-5) is back in hopes of leading Nederland to its first playoff win in five seasons, and maybe more.

“We have to grow up fast and learn how to play together,” English said.

English likes the energy and potential these Bulldogs possess, and they’ll need it in a deeply talented District 21-5A, which includes Memorial, Barbers Hill and Port Neches-Groves. They just have to improve on shot selection and defense and learn “how to be a great teammate,” English said.

The thing he anticipates most? “The improvement made from now until the start of district play.”

The Indians last achieved a winning season right at the end of the 2015-16 season, but a deep senior class that’s been through the fire of tough district play could pave a way to success.

“I feel like we have players who work hard to get better every day and understand what it is going to take to help us reach our goals,” Abel said. “They are also a great group of young men to coach.”

PNG is experienced with at least one senior seeing valuable minutes last season at each position. Forwards Tracy Smith (6-5) and Sebastian Wagner (6-0), guards Drake Rojas (6-0), Trent Lee (6-3) and Jacob Townsend (5-7) and post Riley Abel (6-0) are forming the nucleus along with junior Noah Marchak (6-1) at guard and Jackson Simmons (6-1) at forward.

If PNG is to be successful, it will take great defense, consistent shooting and scoring and team chemistry, Abel believes.

“We have to improve on every faces of the game each and every day, but mainly on our defensive side of the ball,” Abel said. He anticipates the Indians competing and putting on their best performance every game.

Sabine Pass has reached the 2A playoffs each of the past three years, but Bryan’s promotion from middle school coach could help the Sharks become a stronger contender in district play.

In fact, that’s what Bryan anticipates the most about the season.

“We’re going to have to be in the gym and weight room as much as possible,” Bryan said.

The Sharks likely gained extra time in those two areas following the early cancelation of the football season due to low numbers. They have returning playmakers in 6-0 junior guard Harold James and 5-8 sophomore guard Grayson Johnson, while 6-2 junior guard Terry Brown look to impact the Sharks.

“They are eager to learn and they are young,” Bryan said. “We have three sophomores who will be a key part of our rotation.”

Ball handling and shooting, however, are weaknesses the Sharks are addressing.

Team chemistry and unity will be crucial to the Cardinals’ quest for a playoff berth, according to Robertson.

“We will play a lot of guys and everyone must learn to accept their role and play their hardest when given the opportunity,” Robertson said.

Robertson likes the senior leadership on his team. Frontcourt players Koltin Weeks (6-3) and Beau Martin (6-4) are among the impact players, with sophomore guard Grant Boudreaux (5-9) also one to watch.

“There are six seniors overall, and four will be starters to start the season,” said Robertson, who succeeded current Nederland assistant Larry Sterling. “Overall, a great group of kids who are very smart. They all make good grades and are fun to be around on and off the court.”

Robertson wants the Cardinals to improve the identity and culture of Bridge City basketball. To do that, he said, the players must start believing they are good and that they can compete and win.

“I anticipate us to compete and give it all every game this season,” he said. “There will be ups and downs, but it is my goal to be competing for a playoff spot at the end of the season.”

Each of Sostand’s players wrote down team and personal goals during the preseason. They agreed to communicate more on and off the court along with playing “unselfish basketball”. But their overall goal is to go deeper in the Texas Christian Athletic League 2A playoffs and win the state championship.

He has plenty of experience to try and pave a championship path with, including senior forward Lesle Harmanson (6-4), who averaged 13 points and 12 rebounds per game, junior guard Darryl Prevost (6-0, 11 points) and freshman guard Jailan Ardoin (6-3), who nearly averaged a double-double (27.8 points, 9.9 rebounds per game).

“I like the depth of this year’s team,” Sostand said. “We are currently playing a consistent eight-man rotation. At any time, I could start a different lineup and we wouldn’t miss a beat. Our practices have become more intense in that every player is fighting for a starting position this year. This transitions into game play.”

Tekoa’s schedule includes teams from Texas Association of Private and Parochial Schools and the UIL, and Sostand thinks the Cougars will make noise.

“We need to improve our half-court defense, as well as free-throw shooting,” Sostand said. “Our goal is to improve at least by 30 percent this year.”

A questionnaire was not received from either Hamshire-Fannett or Bob Hope.