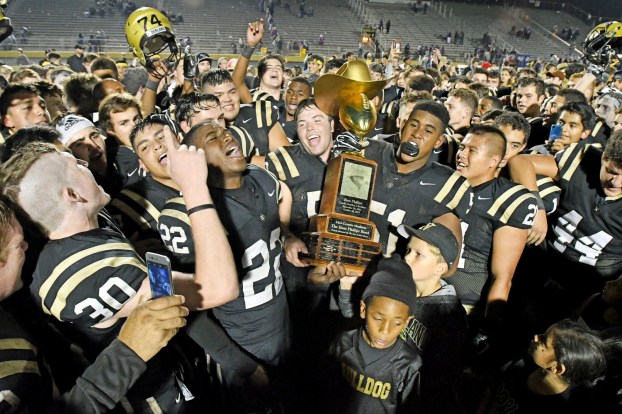 The Nederland Bulldogs celebrate with the Bum Phillips Bowl trophy on the field at Bulldog Stadium on Nov. 10, 2017, after defeating the Port Neches-Groves Indians 36-35. (Brian Vincent/Special to The News) 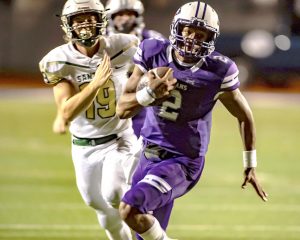 Whichever way you call Friday’s Nederland at Port Neches-Groves football game, one thing is the same for both sides: A lot is on the line.

PNG’s advantage in the series — 49-38-7 — is not in jeopardy, and neither is Nederland’s lead since the game was renamed the Bum Phillips Bowl — 3-1.

Nederland’s 36-35 win at home last year denied the Indians a perfect regular season and outright District 22-5A championship. PNG had clinched a share of the title.

The setting is flipped, and Nederland (9-0, 6-0 in District 12-5A Division II) has a chance to win all the marbles as the visiting team. The Bulldogs have won by double digits in six contests after starting the season with a 19-18 win over West Orange-Stark.

PNG (6-3, 5-1) can still clinch the No. 1 seed and a piece of the crown, coming off an emphatic 31-14 win over Barbers Hill. The Bum Phillips Bowl was shaping up to be a winner-take-all district finale when PNG was forced to forfeit an Oct. 12 win over Crosby for an impermissible recording device in its coaches’ box.

Here are some more things to know about the Bum Bowl:

In 2017, Dave Campbell’s Texas Football magazine ranked Nederland-PNG as the No. 1 all-time high school football rivalry. The game earned five fire icons, similar to five stars, on Dave Campbell’s “heat index” and scored 9 out of a possible 10 for “animosity.”

Despite some significant injuries, each team has its share of playmakers, and both defenses will have their hands full.

Nederland senior quarterback Blaysin Fernandez has started every game and proven productive although various injuries have kept him from finishing in six games. He will start again after tweaking an ankle this past Friday against Crosby, needing just 124 passing yards to reach 1,000 on the season.

The Bulldogs will have to go without sophomore running back Kade Scott, who sustained a season-ending collarbone break. Scott was the fifth leading rusher in 12-5A-II with 959 rushing yards (and 10 TDs) and formed a great 1-2 punch in the backfield with classmate Josh Mazyck (573 yards, eight touchdowns). Both average around 8 yards per carry.

PNG has two-time district MVP Roschon Johnson still behind the controls of the offense. The soon-to-be University of Texas signee has 965 rushing yards and 17 touchdowns and thrown for 1,653 yards and 16 scores.

Jose Ceja has been Johnson’s favorite target. The senior leads the district in receiving yards (1,180) and has scored eight times.

The Indians have played with as many as six offensive starters out due to injuries, but have shown a knack for winning in the clutch. Not counting the forfeit, they had three straight victories each determined in the final 3 minutes.

For the first time since its establishment, the Bum Phillips Bowl trophy will not be presented on the field. School officials agreed this would reduce any chances of unwarranted chaos and mishaps.

Last year’s game in Nederland was nearly interrupted by a red flare that was launched from the PNG student section during the fourth quarter. The flare reached a row of people seated in lawn chairs on Nederland’s sideline. The suspects were detained and faced school discipline.

The trophy will be presented at the next pep rally of the winning team.

What will it take?

Both head coaches were simply asked what it would take to win the Bum Bowl trophy.

Tenth-year PNG coach Brandon Faircloth is going for his third win in the Madness (2009, 2016), so he knows beating Nederland is not easy.

“Play great defense, [and] win the turnover battle,” he said.

Second-year head coach Monte Barrow has been on Nederland’s coaching staff since 1993, and the Bulldogs have won 18 of 25 over the Indians during that time. His predecessor, Larry Neumann, won his first three Madness games (1993-95).

“Who makes plays in the midst of all the emotions,” he said. “What team can stay focused through the ups and downs of the game.”

CONWAY, Ark. (AP) — Jordan Hoy threw for four touchdowns and ran for another — all in the first half... read more