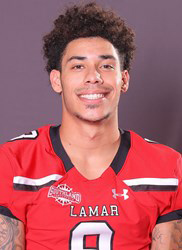 CONWAY, Ark. (AP) — Jordan Hoy threw for four touchdowns and ran for another — all in the first half — and Lamar held on to upset Central Arkansas 38-24 on Saturday.

Hoy hit Isaiah Howard in stride for a 77-yard touchdown pass to close out the first quarter with a 21-10 lead. He nailed Myles Wanza on a 25-yard scoring strike early in the second quarter and hit Mason Sikes from 40 yards out for his final touchdown toss with 1:27 remaining in the first half, to go ahead 35-16 at the break.

Central Arkansas closed to 38-24 early in the fourth. Lamar dodged three bullets late in the final quarter as UCA had first downs inside Lamar’s 30 three straight times but ran out of downs every time. Cameron Houston sacked Luke Hales on the final attempt to secure Lamar’s first win in seven tries against the Bears.

Lamar has won four straight games after starting the season 1-4. The Cardinals (5-4, 4-3 Southland Conference) need one more win to post their first winning record since 2014.

“This was a hard-fought win,” said LU head coach Mike Schultz. “I’m so very proud of this team. We fired every bullet we had in our chamber tonight and we were lucky enough to hang on and get the win. We’ve run the ball pretty well the past two weeks, so we felt like they might be keyed up to stop the run. Jordan and the whole offense did a nice job executing the game plan.”

The Cardinals finished the game with 512 yards of total offense, including 346 through the air. Hoy also led the Cardinals with 23 carries for 49 yards and a touchdown. Senior Isaiah Howard hauled in three passes for 110 yards and a score.

The Cardinals’ defense held UCA to 435 yards and was led by nine tackles from Lane Taylor. Two of Taylor’s nine tackles were for a loss, including one sack. Taylor was one of four players to record a sack Saturday night.

“It was a nice job by the defense all night,” said Schultz. “Our guys did a great job from start to finish. Keep in mind UCA is a very talented team. We really did a great job on third down. It was a great effort all the way around.”

It didn’t take long for the Cardinals to draw first blood. Just 21 seconds into the first, Hoy found sophomore tight end Mason Sikes running wide open down the near sideline for the score. The 28-yard scoring strike was set up by a 47-yard rush from sophomore Kirkland Banks on the first play of the game. Unfortunately, the Bears answered with a seven-play, 70-yard drive to tie the game less than three minutes later.

Proving LU could strike quickly and record a time-consuming drive, Big Red reclaimed the lead midway through the first when Hoy carried the ball in from one-yard out to cap a 14-play, 75-yard drive which consumed 4:45 off the clock. The Cards surrendered a 51-yard run to UCA’s Kierre Crossley on the first play of the ensuing possession, but the defense stiffened forcing the home team to settle for a 24-yard field goal.

The Red and White added to their lead late in the first quarter. After forcing a UCA punt, Hoy hit senior Isaiah Howard wide open over the middle of the field for a 77-yard touchdown. The scoring play took just 11 seconds off the clock and gave LU a 21-10 advantage.

Big plays continued to be the theme in the first half. After stopping the Bears’ offense early in the second quarter, the Cards marched the ball 67 yards down the field in just 57 seconds for the score – a 25-yard pass from Hoy to Myles Wanza. The TD was setup by a 44-yard pass to junior Zae Giles and handed the Cards a 28-10 lead.

The Bears answered with consecutive field goals to trim the advantage to 12 points, 28-16, but the Cardinals stopped the small rally on their next possession. Hoy guided the Cards on a seven-play, 88-yard drive that ended with a 40-yard pass to Sikes – his second touchdown grab of the night. The drive was kept alive by a third-and-long completion to Giles from the LU 13 for 19 yards.

LU defense held the Bears to 288 yards in the opening 30 minutes of action, and the majority of that came on the ground. UCA rushed for 197 yards, 115 of those yards came from Crossley.

After a first half that saw a combined 51 points, the third quarter turned into a defense struggle that lead to just three points on a field goal from sophomore Elvin Martinez. The Bears got back on the board in the second half when Luke Ross caught a two-yard pass from Carlos Blackman out of the wildcat formation. UCA went for the two-point conversion and got it to trim the deficit down to 14 points, 38-24, with 11:36 remaining.

The Cardinals dodged a bullet on their next possession after fumbling the ball away deep in their own territory, but Big Red got the ball back on the next play when senior Dedrick Garner fell on a bobbled snap. Unfortunately, the Cards couldn’t move the ball and were forced to punt it away. The Bears moved the ball down to the LU 26 and on fourth-and-nine threw it into the end zone only to have the ball knocked out of the receiver’s hands in the end zone by senior Lane Taylor.

The Cardinals will be back in action Saturday, Nov. 10, when they host Houston Baptist on senior night. The game against the Huskies will kick off at 3 p.m. from Provost Umphrey Stadium. It can be heard live on Newstalk 560 KLVI and seen live on ESPN+. LU’s senior class will be honored prior to kickoff.

The JaVontae’ Hopkins show did not end in Humble. Almost a week after the Memorial senior rushed for a career-high... read more