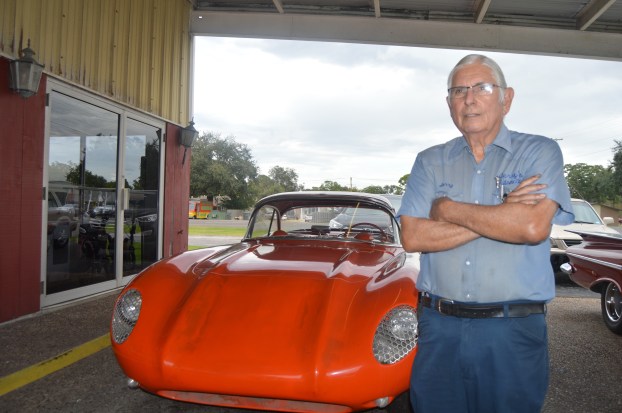 The 1956 Corvette was once the envy of gear heads and car enthusiasts.

Jerry Bellot, who owns a Port Arthur body shop, hopes to turn his (mostly) Corvette into something that children can enjoy just as much.

With a little imagination and few details — the vehicle is part Corvette, with a ’57 Ferrari front — Bellot is transforming his creation into “Lightning McQueen,” an auto-character from Disney Pixar’s movie “Cars.”

“I had motorcycles before then,” Bellot said. “It was a Corvette. They didn’t even come out before ’54 and you couldn’t afford them then. We were going and racing motorcycles, and I would pass that thing every time we went by.”

Bellot said he finally stopped by the dealership in Winnie to see how much the car cost.

“It was a lot of money, but at the time, to have a Corvette was a big thing,” he said. “Today, it doesn’t mean the same thing. The ‘wow’ is gone. Everyone can buy one, but they don’t have what they started with and I do.”

Bellot keeps many of his old cars and motorcycles at his shop Jerry’s Automotive Front End on Memorial Drive, which has been in business for 53 years.

“I keep all of my cars,” he said. “I keep everything — my first cars, first motorcycle, my first wife.”

Bellot plans to get a windshield cover that will represent the “Lightning McQueen” eyes from the movie and some white tubing in the grill to create McQueen’s mouth.

“One time, there was a prototype car that someone turned into a Batmobile,” he said. “Kids had so much fun taking pictures with the car. You can tell it was really special to them. I want to get kids to have that feeling. It’s a relatable experience and the movie is relatable, too.”

Bellot said he chose Lightning McQueen as his model for the car because the car already has a striking resemblance to the Disney character and because Bellot likes the movie.

“I bought the movie,” he said. “I still watch it every once in awhile.”

There is no timetable for the car’s transformation, he said.

The body of a woman who was reported missing from Nederland was recovered at the Veteran’s Memorial Bridge Wednesday night.... read more