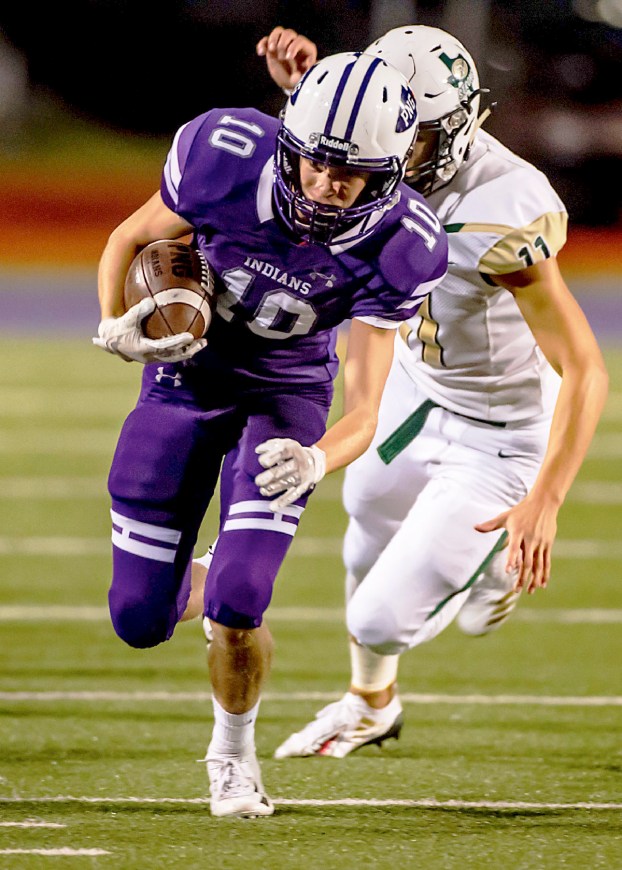 Port Neches-Groves’ Cade Billeaud (10) makes a short reception past Santa Fe’s Aiden Gomez (11) during the first quarter Friday at the Reservation. (Brian Vincent/Special to The News)

FOOTBALL: Indians back to business … with Eagles looming

PORT NECHES — Once Brandon Faircloth told the Port Neches-Groves football team about having to forfeit a game won in the final seconds, the Indians went right back to work, he said.

A chance to control their own destiny in winning the District 12-5A Division II championship outright has been taken off the table for now, however. An iPad caught being stored in the PNG coaches’ box led the district’s executive committee, or DEC, to vote by majority that PNG (5-3, 4-1 in 12-5A-II with the forfeit) give up its 48-45 win over Crosby on Oct. 12.

By NCAA rules, which the UIL adopts for play, recording devices are impermissible “within the playing enclosure for coaching purposes during the game.” Faircloth said the iPad was not used for recording and it was unintentionally left in the coaches’ box.

Now, the Indians’ game on Friday at Barbers Hill (6-2, 4-1) — the team that turned in visual evidence of the impermissible iPad — is for second place outright. Eagles coach Tom Westerberg denied any motivation to shape district standings in his team’s favor by turning in PNG’s violation to the DEC.

“What’s right is right and what’s wrong is wrong,” Westerberg said. “There’s no other motivation.”

Barbers Hill and PNG are meeting for the first time since PNG won a 2016 5A Division II bi-district game 31-26 at Lamar University.

Faircloth, in his 10th year leading the Indians, said no proverbial fuel has been added the fire surrounding a game that has more meaning than it did over the weekend.

“For me, none,” Faircloth said. “For kids, maybe some. As far as coaching is concerned, we’re going to prepare the team like we do every week and get our guys ready to play like we have for the last 10 years. Every game is extremely serious and important to go win if you want a good playoff spot. There’s playoff spots on the line, and that makes [the game] extremely important because that’s what we’re about around here, is playoffs. And [Barbers Hill] is, too.”

The Indians could have a stark advantage over the Eagles on defense.
Barbers Hill has allowed 594.8 total yards per game, and PNG (360.9 per game allowed) went for 452 in last Friday’s 47-19 win over Santa Fe.

Sophomore DaeDae Conner gained 67 of those yards alone on his first carry of the night, going for a touchdown. Faircloth moved him up in recent weeks to fill a role left by injured junior Gavin Deslatte.

A win will still give PNG a chance to earn a No. 1 seed with a win over Nederland in the Nov. 9 Bum Phillips Bowl, but if Nederland defeats Crosby, the Bulldogs (8-0, 5-0) will already have a share of the district title. PNG has won a share of a district title each of the past three years, all in the former 22-5A.

If the streak extends into a fourth year, PNG will have done it overcoming adversity on and off the field. The Indians played last Friday without six injured offensive starters, three of them on the offensive line, and still won handily.

The last time Memorial posted a winning record in girls basketball, Julia Sion was a freshman playing in Class 6A.... read more