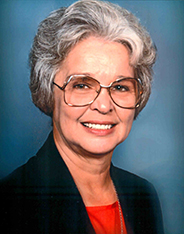 She was born on September 8, 1932 to her parents, Harvey Monceaux and Leona Weekly Monceaux in Morse, Louisiana. Liola moved with her family in 1941 to Orange, Texas. She graduated from Stark High School in 1950, where she was a twirler of the Bengal Guards. After graduation she went to work at Dupont Sabine Riverworks as a lab analyst for 5 years. Liola met and married Howard Simon in 1954. Together they raised six children. She was a devoted homemaker as well as a caregiver to her daughter, Angela Simon, for many years. She volunteered and worked with the PTA at Thomas Jefferson High School.

Liola was preceded in death by her parents, her grandson, Michael Donovan Bushnell, Jr.

The family would like to give special thanks to her caregivers for their excellent care over the past three years, Barbara Edington, Tomica Artmore, Deborah Hinton and Jessett Castro with  Coastal Caregivers, and Cathy Gohlke of Harbor Hospice.