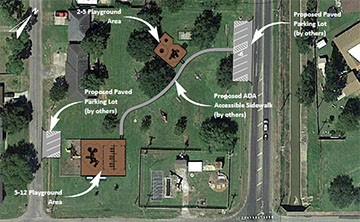 An aerial rendering of Memorial Park with proposed improvements. Courtesy City of Groves

GROVES — Groves City Council is set to give the green light to send their city clerk to an annual election law seminar and to purchase playground equipment for one of their parks at an upcoming meeting.

The meeting where the discussion will take place is scheduled for 5:30 p.m. Monday at Groves City Hall, 3947 Lincoln Ave., Groves.

The seminar, which is put on by the Texas secretary of state, will be held Nov. 27-30 in Austin. The seminar is the 30th Annual Election Law Seminar for Cities, Schools or other Political Subdivisions, and is typically attended by hundreds of people “as it relates to their election-related duties, and pursuant to the Texas Election Code,” according to the Texas Secretary of State’s website.

The city secretary Kim Lowery was criticized recently in a series of Facebook posts on Groves’ website because she will attend the training. City manager D. Sosa sent an email to the council and mayor, provided them with information about the meeting and the reason Lowery was attending the seminar.

“This is continuing education and required for her job function,” Sosa said, adding that many may not be aware that Lowery has essentially three jobs:

“In any other city these responsibilities are covered by a minimum of two or three separate individuals,” he said.

Sosa brought this issue to council’s attention because of the Facebook comments, some of which, he said, are hurtful and cruel personal comments.

Groves isn’t the only municipality to send a representative to election law training. Port Neches, Nederland and Port Arthur also sent one or more persons to this type of training.

“There are changes in statutes that periodically occur and it is necessary for staff to be aware of what the statuary requirements may be,” Port Neches City Manager Andre Wimer said.

Nederland City Manager Chris Duque said he has staff members who attend the training in January.

“It provides god information for elections,” Duque said. “The city of Nederland still administers our municipal elections and that has always been a priority of ours.”

Council will also look to approve the purchase of playground equipment from BYO Playground for Memorial Park’s rebuild. 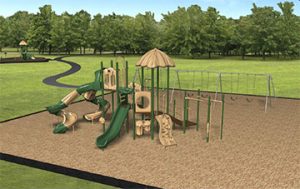 An artist rendering of playground equipment for ages 5 to 12 for Memorial Park in Groves.
Courtesy City of Groves

Prior to last year’s Tropical Storm Harvey, the city’s parks committee was in the process of planning upgrades for city parks, including the three-acre park at the corner of 25th Street and Taft Avenue. The park as well as nearby homes were heavily damaged during Harvey but repairs to outdated equipment coupled with upgrades was deemed a waste of money so the city decided to do the improvements and repairs together.

The turnkey cost is $61,000 and comes with installation. The city will then take care of parking areas and sidewalk in-house, Sosa said. 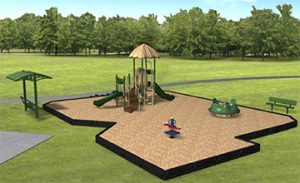 An artist rendering of playground equipment for ages 2-5 for Memorial Park in Groves.
Courtesy City of Groves

Funding for the project comes from the sale of portions of Lindenmeyer Park, located at 32nd Street and Texas 73. Voters approved the sale of the park more than a decade ago.

The proposed improvements include paved concrete parking lots, Americans with Disabilities Act accessible sidewalks, a playground for ages 2-5 and one for ages 5- 12. There will be climbing activities, sensory activities, swings, slides, water fountains and more.

Porterie: ‘Neutral names’ better for harmony, he says   Port Arthur’s seven-member school board took what might have been an... read more