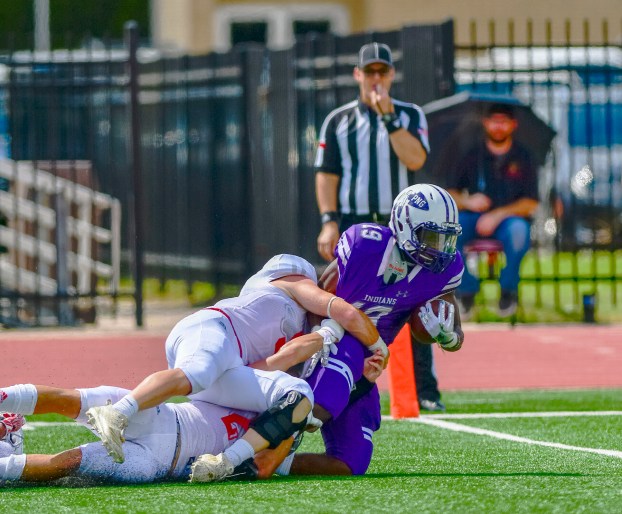 Jaylan Williams of PNG stretches toward the goal line against Tomball on Sept. 15. (Darren Greenway/Special to The News)

PORT NECHES — Late-game mistakes may have caused Port Neches-Groves to blow a 16-point lead last Friday against winless Dayton, but a common theme of resilience helped the Indians prevail in the clutch for the third straight week.

Yes, senior quarterback Roschon Johnson had a hand in all three winning plays, but last week was also a classmate’s turn to play hero.

“I know my team really needed me and counted on me, so when I get the opportunity, I feel the need to play,” running back Jaylan Williams said.

On this call, Williams had to play receiver, then make running back moves to break a 37-all tie.

Less than 3 minutes remained when Johnson shifted to his right and found Williams up the middle. Williams then veered to his left, spun from a would-be tackler at the 36 and then took off to give the Indians the winning touchdown in a 44-37 decision.

“It’s probably one of the most amazing plays in my career, honestly,” Williams said. “I knew my team needed a play to be made, and coach called on my number.”

“That would be our theme word,” 10th-year Indians coach Brandon Faircloth said. “That’s for sure, resiliency. We have really dealt with some adversity, for sure. Every year’s different, and this year, we’ve had our fair share for it.”

PNG finished the win without junior offensive line standout Jaylen Garth, who sustained a minor knee injury, and junior running back Gavin Deslatte, who had a broken ankle the week before at Crosby.

Both will miss Friday’s homecoming game against Santa Fe (4-3, 3-1) but could return the following Friday at Barbers Hill with only Nederland remaining.

“We’ve been thrown a lot of adversity this season through injuries and through other things,” Faircloth said. “To show they just keep fighting, they [PNG Indians] are definitely inspiring to me.”

Santa Fe is another Indians team that has stayed strong months after eight students and two teachers were killed in a May 18 shooting on their campus. Those Indians have played inspired football behind senior quarterback Nathan Kruger. A week after facing 12-5A-II’s leading passer in Dayton’s A.J. Nail (1,850 yards), PNG will meet the third-leading passer in Kruger, whose 1,708 yards are just nine behind Barbers Hill’s Hayden Johnson for second place. Kruger has thrown for 13 touchdowns.

“I expect them to give us everything they’ve got,” Williams said. “They’re a good team, and I’m looking forward to the game.”

Going into the Dayton game (statistics from last Friday were unavailable), Williams averaged 5.6 yards per carry and has seen his share of touches sharing the backfield with Johnson and Deslatte. His 16 carries against Crosby set a season high, producing 66 yards, 2 shy of a season-best against Tomball.

“He’s had a lot of varsity experience,” Faircloth said. “He was very talented coming up from middle school. He really came into his own last year and did some really good things and he’s really excelled and had some great games this year. Our offensive line is doing a really good job for him.”

The Nederland Bulldogs are undefeated heading into Friday’s matchup against the Pirates in Vidor. Nederland (7-0, 4-0 in District 12-5A... read more