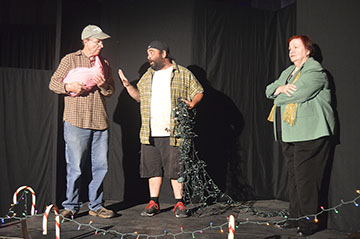 Fans of the original production put on by Act One Scene One theater group will be happy to know their favorite characters are back and this time they’re dealing with the county and more efforts to annex their town — all at Christmastime.

“This show is truly hilarious,” Craig Bertrand, director with Act One Scene One said. “There are times when we get to laughing so hard we have to pause to get back to rehearsal.” 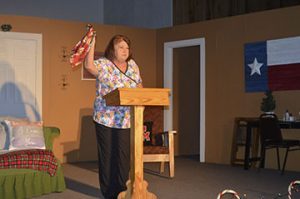 Bertrand said he especially like this show because it brings in character names from other shows they have done that were written by Jessie Jones, Nicholas Hope and Jamie Wooten — who call their work “Southern fried comedies.”

The show brings to life characters such as Georgia Dean Rudd, manager of Bronco Billy’s Buffeteria, which is a combination buffet and washateria. The pink cowboy hat wearing character is played by Dr. Ann Holland. Then there’s Vicki Linthicum as Big Ethel Satterwhite, a nurse at Stairway To Heaven Retirement Village.

A special bond has formed between First Christian Church of Port Arthur, which is hosting the event, and the theater troupe. The church has offered up the venue for a while but was forced to stop when they were flooded last year during Tropical Storm Harvey. 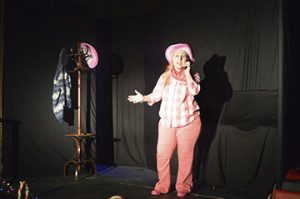 Typically, proceeds form the performances are split between the church and theater group but the folks with Act One Scene One decided to donate all proceeds for the year to the church to help it get back up and running, Bertrand said.

Jo Ann Richards, administrative assistant to the pastor, said this was something she did not expect.

“When the storm happened I sent out an email telling them I was sorry but we would not be ale to host the venue,” Richards said. “I just didn’t expect their response. When they decided to donate all of their earnings this year it was overwhelming. They are a great bunch of people. They have a permanent home here with us if they need it.”

Richards said church officials hope to be back in their sanctuary by November.

Doublewide, Texas Christmas is a dinner theater so reservations are encouraged so cooks will know how much food to prepare.

Sunday matinees start at 2:30 p.m. with desserts at intermission and tickets cost $15.

A 56-year-old man is dead after a shooting at an all-night washateria early Wednesday. Police were dispatched at 1:47 a.m.... read more