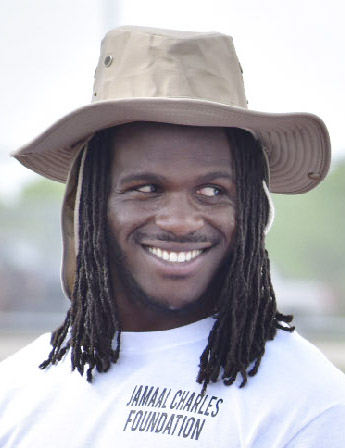 The Jacksonville Jaguars have cut running back and 2005 Memorial graduate Jamaal Charles.

Charles’ return to the NFL after a season with the Denver Broncos has lasted just two weeks. He carried once for 2 yards in Sunday’s loss to the Houston Texans, a week after being held to 5 yards on five carries in a blowout road loss to the Dallas Cowboys.

If no other team picks up Charles, the 11th-year veteran from the University of Texas will have his lowest rushing total of the season. An ACL tear in Week 5 of the 2016 season limited him to 40 yards on 12 carries.

Charles spent his first nine seasons with the Kansas City Chiefs, with whom he is the all-time leading rusher (7,260 yards).

Jacksonville has been looking for a strong performer in the backfield with Leonard Fournette dealing with a hamstring injury. T.J. Yeldon has 327 yards and a touchdown on 79 carries in four starts, but he was held to 28 yards on 12 carries, Jaguars.com reported.

BEAUMONT — If one game doesn’t change a program, beating a ranked conference opponent on top of a miraculous win... read more