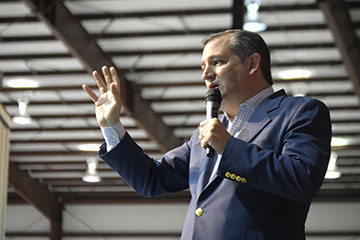 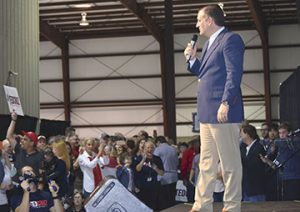 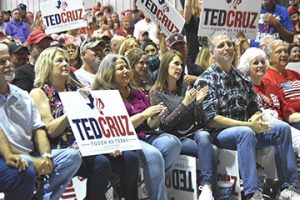 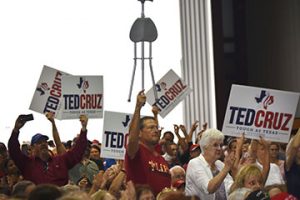 The crowd gets to their feet in support of Republican incumbent U.S. Sen. Ted Cruz during his stop at the Jack Brooks Regional Airport while on the campaign trail on Saturday.
Mary Meaux/The News 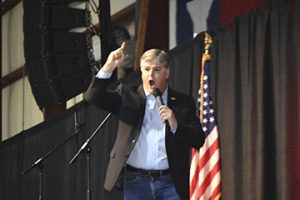 TV and radio conservative talk show host Sean Hannity warmed the crowd up Saturday afternoon by taking verbal jabs at O’Rouke and former President Barack Obama, citing statistics to show the Obama era was the worst in decades for America.

Cruz marched to the stage to chants of “Ted, Ted, Ted” as fans waved signs and small flags.

“What is it they’ve been writing about a blue wave? I think it’s more like wave bye-bye to the blue,” Cruz said.

Cruz said O’Rourke seemed rattled at the last debate before touting his own party’s work — such as tax cuts for small businesses, farmers, ranchers and working families across the state of Texas — and “the state of Texas is booming,” he added.

“Where’s Beto O’Rourke on taxes? He voted against the tax cut and is telling everyone in Texas he wants to raise your taxes. He thinks you’re not paying enough in taxes and he’s pretty sure he can spend your money better than you can.”

Cruz also said he is proud to have led the Senate fight to confirm Justice Neil Gorsuch and Justice Brett Kavanaugh, both President Trump nominees, as the crowd rose to their feet with thunderous applause.

“I might just say the Kavanaugh hearings were one of the saddest spectacles in the U.S. Senate,” he said. “Once those allegations came out I think it’s important we had a fair hearing.”

The hearings allowed Dr. Christine Blasey Ford “to tell her story and be treated with respect,” which was the right thing to do, but at the same time Kavanaugh was not afforded the same respect, Cruz, who sits on the Senate Judiciary Committee, said.

But, he said, you saw Democrats going down “into the gutter,” willing to smear Kavanaugh and his family’s name with “uncorroborated allegations.”

“One after another falling all over themselves to see who could be more ridiculous,” he said. “By the way, for the record, I am not Spartacus and let me tell you if Beto had been in the Senate, he would have put on his toga and did a full Spartacus dance.”

Cruz’s conservative message hit a positive note with those at the rally.

Charlie and Vickie Price said they were pleased with the event. Charlie Price said Cruz is waking up America’s conservatives.

He said Cruz hit a homerun with his speech and that he’s fed up with people saying that conservatives don’t know what they’re talking about. He’s also tired of the “PC” or political correctness, saying it makes no sense.

“We are all Cuban refugees and what is happening with the Democratic Party is what we ran from,” DeLosReyes said.

Early voting for the election begins Monday and lasts until Nov. 2.

The show WILL go on: Groves Pecan Festival kicks off with breakfast

Contrary to Facebook rumors, the Groves Pecan Festival is not canceled. No, no, no. The annual festival, now in its... read more