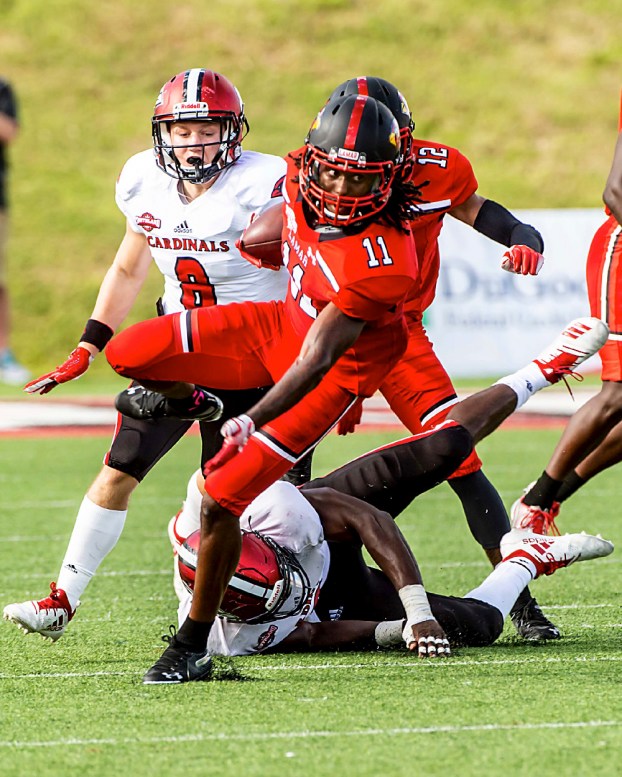 FOOTBALL: No statement yet? Lamar can make one against SHSU 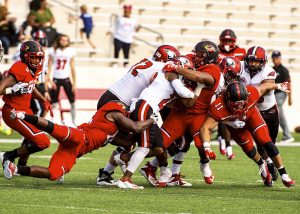 Lamar’s defense gave up 585 yards against Incarnate Word but still helped pull out a big victory. (Brian Vincent/Special to The News) 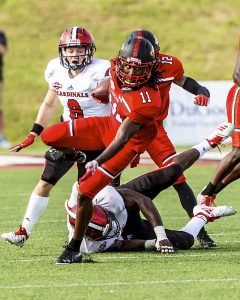 BEAUMONT — If Lamar made a big statement with its miraculous finish against Incarnate Word, a win against No. 14 Sam Houston State would just shake the Southland Conference.

Lamar has done that before.

The last time the Cardinals defeated a ranked team, Kade Harrington rushed for 230 yards and two touchdowns in a 49-46 win over the No. 3 Bearkats in Huntsville on Sept. 19, 2015. That same SHSU team finished second in the Southland, two games behind McNeese State, but marched all the way to the NCAA Division I semifinals against Jacksonville State.

Four of Lamar’s seniors — safety Davon Jernigan, linebacker Chaston Brooks, cornerback Rodney Randle and wide receiver Martell Hawthorne — were freshmen on the team that season, so pulling off that huge of a victory is nothing they haven’t experienced.

“I don’t know that I’m a big believer on this belief it’s a signature win. You know what, every week in the Southland Conference, you better get ready to play. If you go back and look — Nicholls [State] goes up to Abilene Christian and Abilene Christian beats Nicholls, Nicholls beat Sam Houston — the only one that’s coming through this and the reason they’re doing this is tremendous is McNeese [State], and McNeese still has a lot of tough teams to play.”

NO TIME TO WASTE

The challenge Saturday, Schultz said, is the turnaround from last Saturday’s thriller, which ended a four-game skid. Lamar (2-4, 1-3 Southland) had an off-date to prepare for UIW and must avoid any hangover against SHSU (4-2, 3-1), which beat Northwestern State 42-28 last Saturday in Natchitoches, Louisiana.

“I think there’s a little confidence,” Schultz answered when asked how much confidence did the Cardinals exude the day after beating UIW. “I don’t think it’s too much confidence by any means of the imagination. I think our kids are smart enough to know what type of opponent is coming in this week, and they’re not going to go away easily. I still think the road to the conference championship goes through Sam Houston, along with a couple other places, but I think they’re still one of the top-ranked teams in the conference.”

The Bearkats share second place in the Southland with Central Arkansas, which lost in overtime in Huntsville on Sept. 29, and Incarnate Word. Only a 27-7 loss at Nicholls has kept the Bearkats from leading the league.

After Lamar, SHSU has Southeastern Louisiana, UIW, Abilene Christian and Houston Baptist remaining on the schedule. McNeese is not on SHSU’s schedule.

The Cardinals, statistically, won’t have quite the task of slowing down the Bearkats’ offense as it did against UIW. Lamar allowed 585 total yards (515 passing) last Saturday and is ranked last in the Southland in total offense at 523.7 allowed per game. SHSU’s offense is seventh in the conference at 416 yards per game and its defense fourth at 387.

Senior Davion Davis, who ranks second in receptions per game (6.2) and and junior Nathan Stewart, who is second in receiving yards per game (86.8) are big reasons for the Bearkats’ moving the ball well. But the Cardinals will look to contain sophomore Kyran Jackson, the reigning Southland offensive player of the week who turned in 152 rushing and 116 receiving yards against Northwestern State.

Schultz correctly predicted to his team during a pregame meal last Saturday that Lamar would need a special teams score to have a shot at beating UIW. Caleb Abrom’s 66-yard return of Lane Taylor’s field-goal block as time expired earned him the Southland special teams player of the week honor.

SHSU has won seven of its last eight games against Lamar and leads the all-time series 9-20-1. The Cards last defeated the Bearkats in Beaumont in 1989 by a 41-0 score. (Lamar shut down its football program for the next year and resurrected it in 2010.)

Three Jefferson County natives are on SHSU’s roster. Brandon Jackson Jr. is a redshirt sophomore defensive lineman and Brian Roy is a freshman offensive lineman, both from Port Arthur. Sophomore linebacker Markel Perry, an Ozen graduate, is returning to his hometown Saturday.

Saturday’s game is Faith & Family Night, which includes special discounts for groups. … Lamar is offering $1 hot dogs and $2 popcorn during the game. … Education First will hand out pom-poms and megaphones to fans, while supplies last.

Welcome back to the third round, Bulldogs. The Nederland tennis team had lost in the UIL area round each year... read more