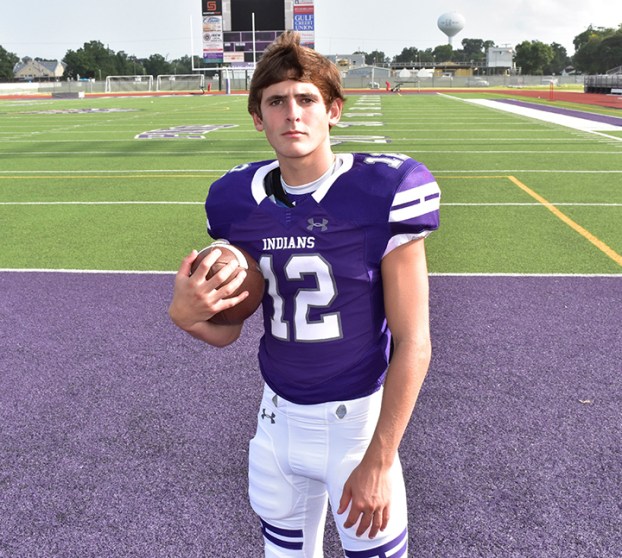 PORT NECHES — Peyton Proenza maintains a mentality that he must catch every pass.

An All-America quarterback depends on Proenza, even if he drops the ball earlier. That was the case last Friday when Port Neches-Groves trailed Crosby on the road.

“It was my first drop of the game,” Proenza said. “A couple of plays later, I caught a pass, about 7 yards. The play before we actually scored, we ran the exact same play, and they called [that] I was out of bounds.”

Spoiler alert aside, Roschon Johnson continued to count on the junior, who’s seen more playing time in recent games due to injuries among the Indians’ wide receivers.

Banjo is a word meaning combination of man-to-man and zone coverages. Down 45-40, Johnson and the Indians attacked the Cougars’ defense, and for the second straight year, Johnson engineered a comeback win over the Cougars in a high-scoring affair.

Only this time, Proenza delivered as well, catching in the back of the end zone with 3 seconds left after Johnson danced from left to right scanning for his target.

“He ran it again,” Proenza said. “Same play, touchdown. Me and Roschon, that play we just connected. We did the same thing. It was just unbelievable.

“I knew I had to catch it. I was nervous before the play. I knew I could do it.”

With that catch, the Indians (4-2, 3-0 in District 12-5A Division II) are tied with Nederland (6-0, 4-0) for first place in the district, a possible de facto championship in the Nov. 9 Bum Phillips Bowl still possible.

“He’s a great player,” PNG coach Brandon Faircloth said of Proenza. “He was starting in some personnel groupings, and obviously he’s getting a chance to get more involved. He’s delivered the last two weeks against Vidor and Crosby. We knew he’s a great player. Hard worker, smart, intelligent kid. He’s getting his chance and he’s taking advantage of it.”

Proenza had 32 yards on four catches against Crosby, a week after hauling in a two-point conversion pass from Johnson and making two catches for 28 yards.

As important as Proenza’s big-game mentality, Faircloth praised Johnson, who received his Under Armour All-America Game jersey Tuesday during a school assembly, for his ability to perform and win in the clutch. PNG has won its past two games in the final 2 minutes.

“He’s calm under pressure,” Faircloth said. “He’s confident. Those are kinds of things with 2 minutes to go, when your quarterback has that demeanor that everything’s OK and we have plenty of time to go score, it rubs off on your offense and gives everybody confidence we can get the job done.”

PNG hits the road Friday to take Dayton (0-6, 0-3), and the Indians, who won shares of the last three District 22-5A championships, are cautious to not let it turn into a trap game.

“We’ve been taking it to heart during practice,” Johnson said. “Coach Faircloth has been on the team. He’s letting us know we can be beat by any team if we don’t prepare for it. We’ve been, basically throughout practice, taking things more a lot more serious than normal.”

And Proenza is looking to become more of a factor as the regular season hits the home stretch with the mentality of a factor.

“I have to catch every pass,” he said, explaining the mentality. “I have to think I’m going to get every game winner now. I know I have to win the game.”
*
I.C. Murrell: 721-2435. Twitter: @ICMurrellPANews