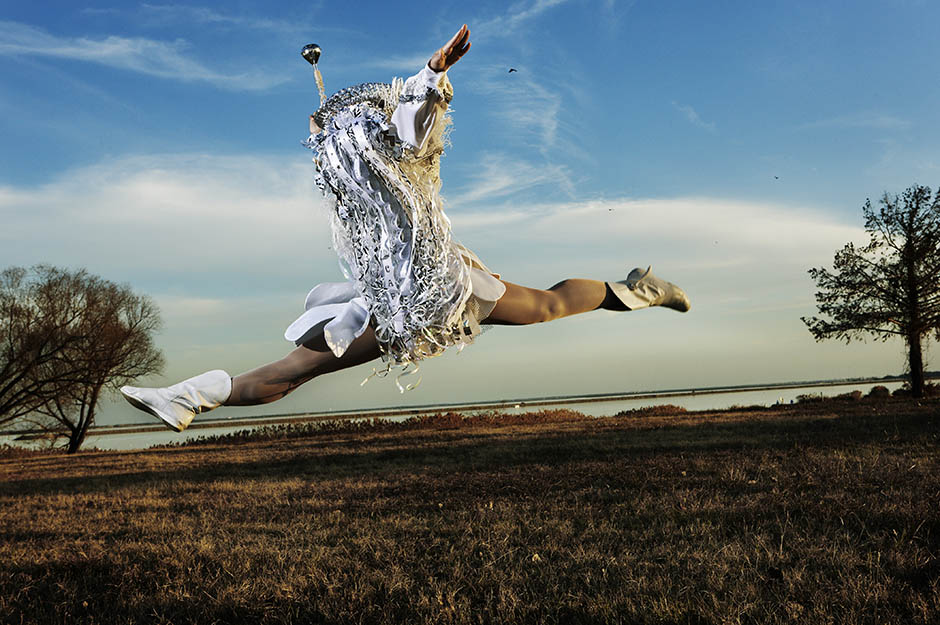 BEAUMONT — An art exhibit at Lamar University is spotlighting the bigger and better tradition of the not-so-humble Texas mum.

The Dishman Art Museum is currently displaying “Mum,” the photographic work of Texas native and fine arts photographer Nancy Newberry. In it, Newberry depicts the growingly extravagant tradition of the homecoming mum.

“It is a very elaborate corsage. In the traditional aspect, it is given as a gift; but, I think in a contemporary way, the way that students wear them has changed a bit since I was in school,” Newberry said.

Some of the subjects in her pictures wear mums that are as large as their bodies and others that outshine even their dresses. In addition, both girls and boys wear mums.

“I’m Texan. I grew up in Texas. I participated in this when I was a younger person,” Newberry said. “Honestly, I hadn’t thought about it much since, but I’m interested in all kinds of rituals and iconography.” 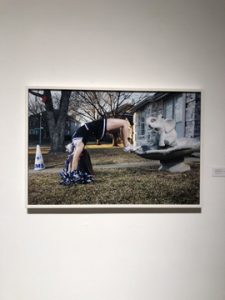 “Mum” is currently on exhibit at the Dishman Art Museum at Lamar University until Nov. 9. Admission is free and open to the public. (Jennifer Robertson/ Special to The News)

Newberry became inspired when she was at her parents’ home recovering from a car accident. She came across a box of what she dubbed “relics” from her mom’s school years. Among them were chrysanthemums in full bloom.

“Basically what she had were fall flowers, wadded up old ribbons, bells and personal notes,” Newberry said. “Just then, everything I had in my mind kind of collided at the same time.”

Newberry’s concept of mums soon started to develop as an art project.

“I started thinking about this as a concept, and I wanted to see if I could take it further.”

Newberry started taking photos of students wearing their mums — some modest and traditional, others elaborate and new — at or around their homes.

She said she was shocked to see some of the teenagers’ more extravagant mums.

“I knew when I walked in and saw (it), it was way different than what I expected. It was so much bigger than I remembered,” she said.

Newberry compared the ever-more-elaborate mum to folk art and to something uniquely Texan.

“I think, in a way, it’s a bit of folk art. Rituals and objects can do things like unite communities. That’s what Homecoming is supposed to do — the premise of Homecoming is to welcome people back to the community,” Newberry said.

“Ceremony rituals do the same thing. It becomes, for me, part of the unique landscapes that we have.” 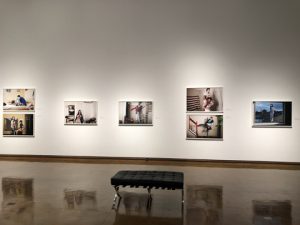 “Mum” is currently on exhibit at the Dishman Art Museum at Lamar University until Nov. 9. Admission is free and open to the public. (Jennifer Robertson/ Special to The News)

“Mum” is Newberry’s first of three bodies of work that deal with Texas culture.

“Although the Texas mum ritual is the theme, Newberry manages to make the images more personal by examining her subjects in their own private and somewhat unusual environments,” Dennis Kiel, Dishman Museum director, said.

“In this particular case, I think it speaks to the complexities between self and culture, and the self presentation and formation of identity in social groups,” Newberry said.

“Texas provides a large field of ideas for me… It’s effectively a land of unwritten novels.”

Newberry’s “Mum” is on display on the first floor of the Dishman Art Museum at Lamar University until Nov. 9. Admission is free and open to the public.