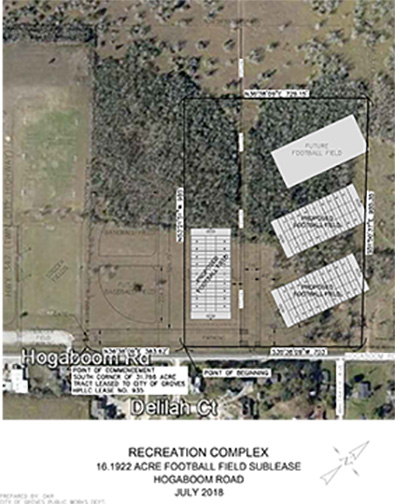 GROVES — There is good news for the folks with Port Neches Groves Youth Football Association in their quest for permanent fields.

Groves City Council recently approved a sublease by the city with the PNGYFA on 16.92 acres of its 31.76 acre tract lease from Huntsman.

Rene Villarreal, president of the PNGYFA, said he was pleased with the joint venture between the association and the city to get fields completed.

Every year between 240 to 260 football players sign up for the league as well as 20 to 40 cheerleaders, he said.

But without a permanent home, teams practiced and held games at the auxiliary field next to the tennis courts at Port Neches-Groves High School.

“This will allow us to not only have our own fields, it also allows the high school to use their fields as they were intended to be used,” he said.

Finding a permanent home has been a goal for not only Villarreal but for previous leaders before him, such as Mark Holmes.

“The goal has always been to have our own fields and be not only self-sufficient now but for years to come,” he said.

Villarreal said construction is scheduled to begin in November or December and the organization will seek different types of sponsors for the fields in the near future.

In addition, the remaining acreage will be used by the city to move the girls softball fields from Lyndenmayer Park, when the park sells. The city will also have room for additional park features as well as a walking track and other items to be determined at a future date, Groves City Manager D. Sosa said.

“The city plans to work with PNGYFA to rough in the site and prepare it with drainage for the final football fields and softball fields as well as establish the parking, running water and sewer service and ingress and egress,” Sosa said.

Sosa sees several positives to the growth: It is good for the community and helps young people develop into good citizens, teaching them life lessons whether they win or lose.

The fields will also help give the city a boost with sales tax as families look for a place to eat, grab a drink or shop.

Since area traffic is busy already, the city has future plans to widen a portion of Hogaboom Road so there is a continuous right-turn lane.

Money from the sale of Lyndenmayer Park will be reinvested to help the project.

The fields will be part of the Huntsman Recreation Complex, s announced in March 2016.

Huntsman Port Neches Operations has been in a partnership with Gulf Coast Youth Soccer Club since the 1992 donation of about 25 acres of land at Hogaboom Road and Twin City Highway.

The recreation complex will be adjacent to the soccer fields.

MACKE: Is a ‘Pothole Posse’ in Port Arthur’s future?

Residents who say they are tired of waiting for the city to repair public roads have started filling potholes on... read more