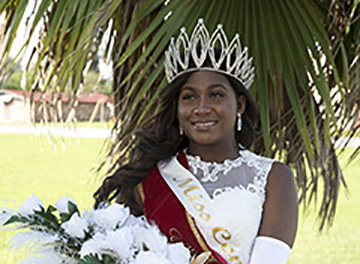 This year’s CavOILcade queen Asa Lewis is working hard to reach her goals.

The busy student holds a love for theater and is in her third year studying theater.

“When I was in my sophomore year I had a theater teacher that was like a breath of fresh air,” Lewis said. “Then in my junior year I grew as an actress.”

In November, the theater students will be taking part in the production of The Lost Boys, which is a spin on the tale of Peter Pan.

Lewis plans to attend Rice University where she will major in pre-med in dermatology with a minor in theater arts.

A few years back when her grandmother, Norma Fontenot, became ill Lewis’ mother Sandra Fontenot helped care for her.

“I really admire my grandmother, that lady was really humble,” she said. “And if she had a dime and a nickel an you needed a dime she would give it to you. She was so quiet in nature, a woman of faith and she had this will to live. She’s a role model for me, my mom as well.”

Lewis cherishes her time with CavOILcade and said it opened up horizons for this involved as well as preparing those involved for the future. Networking, new friends and how to carry yourself in a wise and mature manner are some of the experiences she enjoyed.

Besides being named queen Lewis was also named Miss Congeniality.

Asa Lewis is the daughter of Sandra Fontenot and Alfred Roberson and the late Risley Lewis Sr. She represented Hannah Funeral Home in the pageant.

‘No Manches’ to clean up sea wall

By Lorenzo Salinas l.v.salinas@panews.com   The sight on the seawall may soon be looking a little cleaner thanks to an... read more