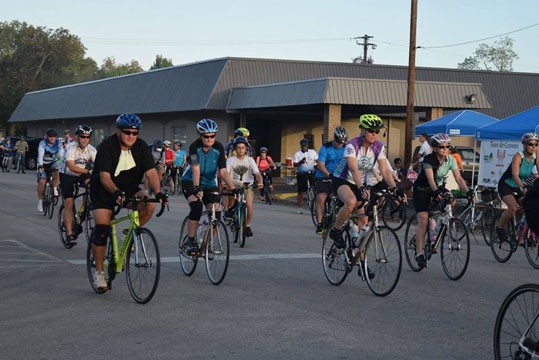 The 4th annual Tour de Groves starts Saturday in downtown Groves. Registration can be done online or by filling out a form and mailing it in. (Courtesy photo)

GROVES — Cycling enthusiasts are getting ready for a local ride that would benefit seniors in the area, as well as for an opportunity to enjoy the Mid County outdoors.

Coasting Forward, a nonprofit organization, and Coastal Caregivers Inc. are hosting the Fourth Annual Tour de Groves. All proceeds will go toward the Groves Senior Center.

Organizer Barbara Edington, who is also with Coastal Caregivers, said the annual bicycle ride is an opportunity to benefit senior citizens in the area.

“We work with the elderly; so, we wanted to do something to help them as well,” she said.

Tour de Groves has raised about $5,000 in the past three years for senior citizen centers.

“The first year, we had a severe rain shower and so only about 75 people showed up,” Edington said. “However, for the past two years, we’ve had about 150 to 165 bikers show up.”

Edington described the feedback from the community as “really good.”

“We just wanted to introduce a lot of the areas we have around here to people, and to show them that they are safe to ride,” Edington said. “For example, Port Arthur along the canal area (is) one. Port Arthur has done so much to beautify its city…

“We wanted to show the positive parts of our towns.”

Tour de Groves starts in downtown Groves and, depending on the route, will go through Port Neches to Port Arthur and back.

“One of the reasons we did this was because we wanted to get people away from electronics and to go outside,” Edinton said. “There are so many things for people to do outside. Hopefully, this will remind them.”

Edington has been a cycling enthusiast since 2013. She attributed her love of cycling to her father.

“My father is a cyclist and he wanted me to start cycling with him,” she said. “He’s 70, but he still continues to ride circles around me.”

“This is all a way for organizations to help and to be seen in the community,” she said.

Weather forecast has a cold front coming in through the week with a possibility for rain during the weekend. Edington said, at the very least, the cooler weather would be appreciated.

Registration is online at BikeReg.com or Active.com. One may also register by a signup form at the Groves Chamber of Commerce or at the Groves Senior Center. Forms may be mailed to P.O. Box 1718, Groves, Texas 77619.

Riders may also register the morning of the event starting at 6:30 a.m. More information can be found at www.tourdegroves.com.