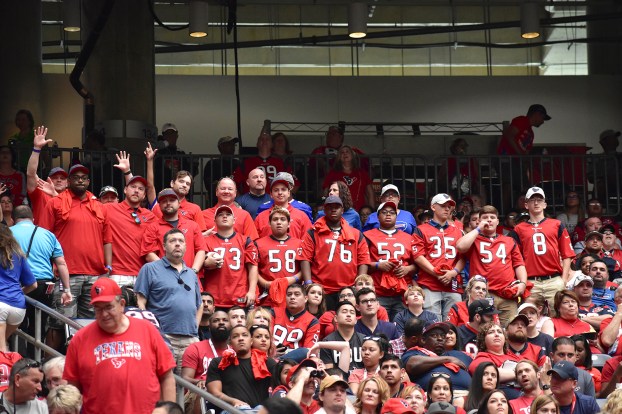 Sabine Pass’ football seniors, coaches and administrators are seated in the bowl area of NRG Stadium on Sunday. The Texans treated the team members, whose season was canceled Sept. 17 due to a low number of available players, to a weekend of activities. (I.C. Murrell/The News) **CORRECTS date of cancelation** 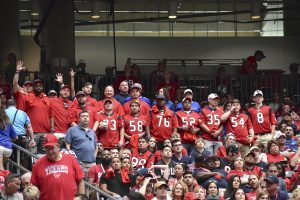 Sabine Pass’ football seniors, coaches and administrators are seated in the bowl area of NRG Stadium on Sunday. The Texans treated the team members, whose season was canceled Sept. 17 due to a low number of available players, to a weekend of activities. (I.C. Murrell/The News) 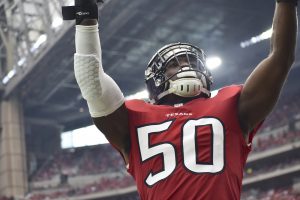 Tyrell Adams (50) of the Texans hypes up the crowd as he runs through the end zone on a touchback Sunday. (I.C. Murrell/The News) 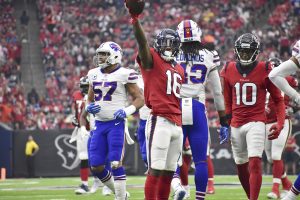 Texans receiver Keke Coutee points first down after a reception in the first quarter against the Bills on Sunday. (I.C. Murrell/The News) 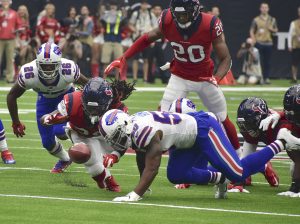 Buddy Howell (38) of the Texans and Ramon Humber (50) of the Bills chase down a loose ball after the Bills’ Ray-Ray McCloud muffed a punt in the first quarter on Sunday. The Texans recovered the ball. (I.C. Murrell/The News) 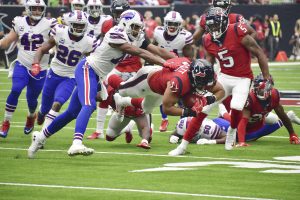 Brennan Scarlett of the Texans pounces on a fumble after the Bills muff a punt in the first quarter Sunday. Buffalo’s Andre Holmes goes for the tackle. (I.C. Murrell/The News) 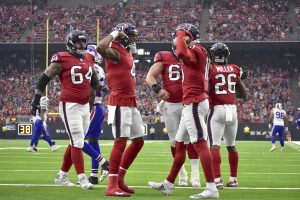 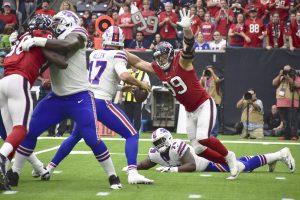 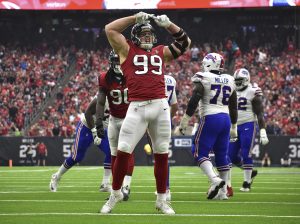 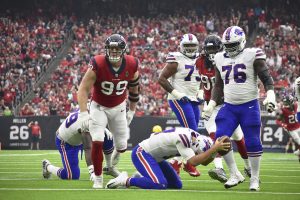 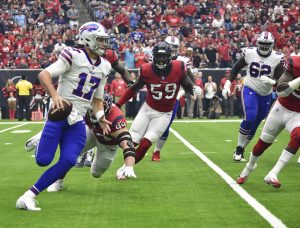 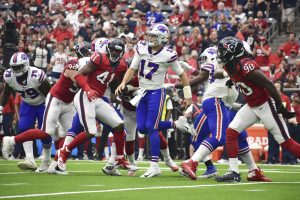 Bills rookie quarterback Josh Allen follows through on an incomplete pass in the pocket against the Texans on Sunday. (I.C. Murrell/The News) 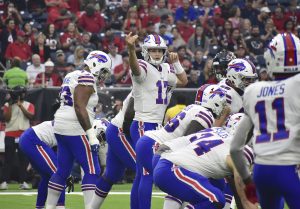 Bills rookie quarterback Josh Allen calls an audible during the first quarter against the Texans on Sunday. (I.C. Murrell/The News) 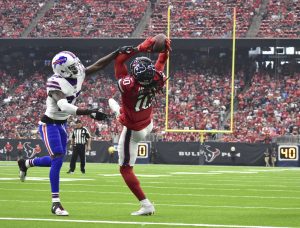 DeAndre Hopkins of the Texans pulls down a 13-yard catch as cornerback Tre’Davious White defends in the first quarter Sunday. (I.C. Murrell/The News) 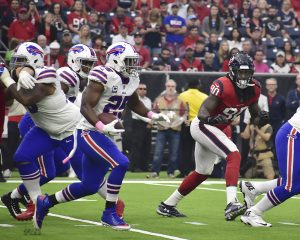 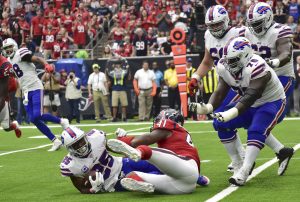 HOUSTON — Johnathan Joseph’s 28-yard interception return for a touchdown with 1:23 remaining lifted the Houston Texans to a 20-13 victory over the Buffalo Bills on Sunday.

The Texans trailed by three when Phillip Gaines was called pass interference on Will Fuller in the end zone with two minutes remaining, moving the Texans 41 yards to the 1-yard line.

But the Texans (3-3) lost seven yards on three plays, capped by an incomplete pass intended for Ryan Griffin that Matt Milano knocked down to force Houston to kick.

A 27-yard field goal by Ka’imi Fairbairn tied it with 1:34 remaining.

Two plays later Joseph stepped in front of a pass from backup Nathan Peterman that was intended for Kelvin Benjamin and dashed untouched into the end zone to put the Texans on top and help them avoid their third straight overtime game.

The Bills had a chance to tie after that, but Kareem Jackson intercepted Peterman with 35 seconds left to secure the victory.

The Bills hurried and harassed Watson all day, sacking him seven times and hitting him 12 more times. Watson, who was questionable this week with a chest injury, was slow to get up several times and didn’t seem to be moving as well as he normally does.

Watson was 15 of 25 for 177 yards with a touchdown and two interceptions. He also lost a fumble.

Peterman threw for 61 yards with a touchdown and two interceptions for the Bills (2-4) after taking over for rookie Josh Allen, who left the game with an elbow injury late in the third quarter. Allen threw for 84 yards and ran for 20.

The Bills took their first lead of the game when Peterman found Zay Jones in the corner of the end zone on a 16-yard touchdown pass that made it 13-10 early in the fourth quarter.

Lorenzo Alexander tipped a pass by Watson at the line and intercepted it on the first drive of the second half. The Bills had a first down at the 8-yard line before their offense stalled and they kicked a 22-yard field goal to cut the lead to 10-3.

Peterman’s first pass after taking over was incomplete and his second one was short of the first down, and the Bills added a 52-yard field goal to get within 10-6.

Watson was sacked on Houston’s next drive and Harrison Phillips recovered his fumble at the Houston 32 near the end of the third quarter.

The Texans punted on their first possession, but rookie Ray-Ray McCloud fumbled on the return and it was recovered by Brennan Scarlett. Houston took advantage of the mistake a few plays later when Watson connected with DeAndre Hopkins on a 13-yard touchdown pass to make it 7-0.

Tyrell Adams gave the Texans their first blocked punt since 2014 early in the second quarter and it was recovered by Scarlett.

But Houston couldn’t move the ball after that and settled for a 33-yard field goal to push the lead to 10-0.

The Texans had a chance to add to the lead just before halftime, but Watson was intercepted in the end zone by Jordan Poyer.

Bills LG Vladimir Ducasse left the game in the fourth quarter with a knee injury. … Allen looked to be in quite a bit of pain in the sideline as trainers worked on his elbow.

In the wake of Sabine Pass canceling the remainder of its football season due to the lack of players, the... read more