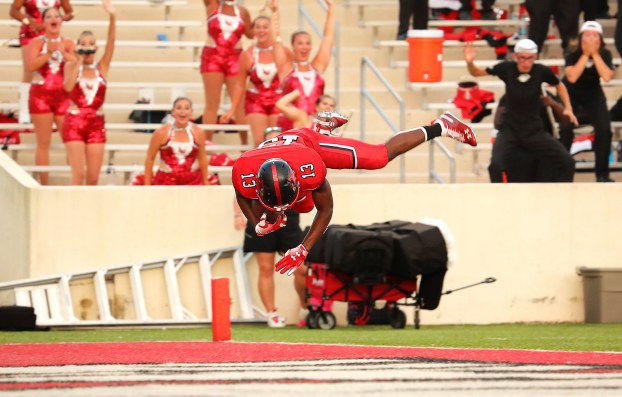 Cornerback Caleb Abrom dives into the end zone at the end of a 66-yard blocked kick return that gave Lamar a 27-21 win over Incarnate Word on Saturday. Abrom was flagged for unsportsmanlike conduct on the play, but the clock had expired. (Jeff Kellum/Lamar media relations) 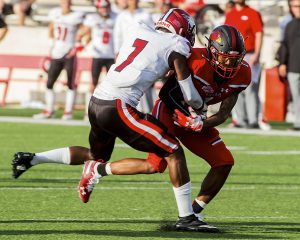 Lamar receiver Jawun Ruffin protects the football on a reception as Jamarkese Williams of Incarnate Word goes in for the tackle Saturday. (Brian Vincent/Special to The News) 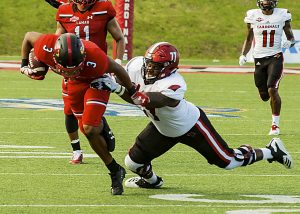 Garrison Mitchell of Lamar returns one of his two interceptions as Terence Hickman II of Incarnate Word tackles him Saturday. (Brian Vincent/Special to The News) 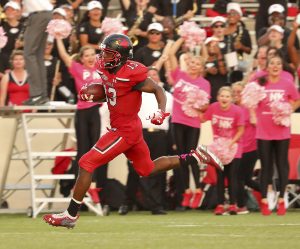 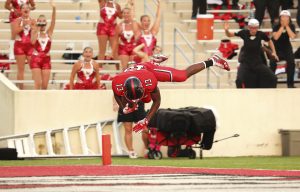 Cornerback Caleb Abrom dives into the end zone at the end of a 66-yard blocked kick return that gave Lamar a 27-21 win over Incarnate Word on Saturday. Abrom was flagged for unsportsmanlike conduct on the play, but the clock had expired. (Jeff Kellum/Lamar media relations)

BEAUMONT — Lamar needed this victory. With a stroke of luck, the home Cardinals earned it.

Free safety Lane Taylor blocked a 40-yard Cody Seidel field goal attempt, and the ball took a big hop to cornerback Caleb Abrom, who returned it 66 yards as time expired for a seemingly unpredictable game-winning touchdown before 6,113 in Lamar’s 27-21 triumph over Incarnate Word on Saturday.

“All I can say is, Coach called it, Lane Taylor came through with the play, I caught the ball and ran as fast as I could,” Abrom said.

Lamar coach Mike Schultz intentionally used all three of its timeouts to ice Seidel, who had missed a kick to the right just after the second stoppage.

“I was trying to time it because I wanted him to kick it and get it called right before,” Schultz said.

The late reversal of fortune ended a four-game losing streak for a team that had come within a combined seven points of winning its first two Southland Conference games of the season.

“This is a program-changing win,” Lamar quarterback Darrel Colbert Jr. said. “Incarnate Word is a great team, 3-0 in the conference. They played some great opponents. They beat a team we lost to in a close game.”

Schultz was a little cautious about terming the win a program-changer.

Lamar had lost is past two meetings to San Antonio’s Incarnate Word (3-3, 3-1). In more pressing matters, the Jefferson County Cardinals had not won since a 70-7 thrashing of Kentucky Christian on Sept. 1, only to come close in the next two home games.

One more lucky break each against Northwestern State (49-48 defeat) and Southeastern Louisiana (30-24 loss) would probably have Lamar at 4-2 and 3-1 in the Southland with reasonable hopes for an NCAA Division I playoff berth alive. Still, Schultz’s Cardinals earned a much-needed marquee victory.

The junior college transfer took a screen pass from Darrel Colbert, rushed to his left, reversed field, went around right end and turned in an 89-yard touchdown early in the second quarter to tie the game at 7. The pass play is the longest in Lamar history, beating the old record of 87 from George Parks to Larry Ward on Oct. 26, 1957.

Colbert completed 14 of 25 passes for 254 yards and two touchdowns. His second scoring strike went to Zae Giles for 40 yards early in the third quarter.

Incarnate Word’s Ra’Quanne Dickens, the Southland’s leading rusher going into the day, was held to 57 yards on 17 carries, but had a 1-yard touchdown run in the third quarter that evened the game at 14-14.

Taylor intercepted Copeland with 14:04 left in the second quarter. That set up the one-play Lamar scoring drive, Ruffin’s 89-yard catch-and-run.

Copeland led the visiting Cardinals on a 10-play, 85-yard drive from his own 2 before Mitchell made his first steal in the end zone with 1:37 left before halftime. Lamar only went 10 yards in five plays before time expired.

Copeland, however, did drive UIW 75 yards in nine plays to knot the game at 21 with 13:28 remaining in the game.

After UIW tied the game, both teams traded punts. Lamar had good starting position at its own 48 with 3:57 to go after 2017 West Orange-Stark graduate Malick Phillips drew a 15-yard flag for unsportsmanlike conduct. Phillips shoved a Lamar player’s head on a fair catch.

Lamar could not earn a first down and, after a delay of game penalty, punted down to the UIW 13.

Copeland led UIW 65 yards in 11 plays, completing a 14-yard pass to Jaelin Campbell with 12 seconds remaining. That’s when the visiting Cardinals set up for the field goal that the home Cardinals denied.

Colbert was happy he could rely on the Lamar defense to give him some opportunities on offense.

“We got a good defense on the other side of the ball,” he said. “Just hearing coach [and defensive co-coordinator Troy] Douglas talk the past two weeks about them getting turnovers — if the ball is in the air, make a play on it — they do a good job of that. There was a lot of that going on in fall camp.”

Sophomore running back Myles Wanza had a strong performance in his first game for Lamar since a lingering shoulder injury against Texas Tech on Sept 14. Wanza went for 79 yards on 14 carries, with a long of 15 yards.

A game official was apparently run over by at least one player with 8:18 left in the game. The official was helped up and walked under his own power into the Lamar medical tent after being attended to on the ground for about 5 minutes.

Taylor for his interception and block that led to Abrom’s game-winning return.

NEDERLAND — Blaysin Fernandez was not going to be sidelined … not by injury, anyway. Healthy enough to finish a... read more