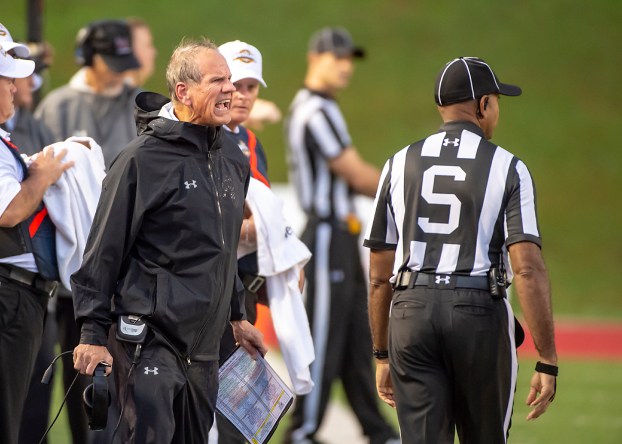 Lamar coach Mike Schultz is looking to catch a break and earn only the second Southland Conference win in his tenure. (Brian Vincent/Special to The News)

FOOTBALL: When Cardinals collide: Visiting Redbirds not UIW of old

BEAUMONT — Lamar and Incarnate Word finished near the bottom of the Southland Conference in 2017. Incarnate Word’s only victory: A 33-24 win over Lamar in San Antonio.

How things can quickly change.

Under first-year coach Eric Morris, UIW (3-2, 3-0 Southland) is one of two teams unbeaten in Southland Conference play, having played one fewer game than McNeese State. If Lamar (1-4, 0-3) is to dig from the bottom of the 11-team league, it can start by handing UIW coach Eric Morris his first conference loss.

“They’re playing with a lot of veteran players,” Lamar coach Mike Schultz said. “When I look at that team, I think they have seven to eight seniors on defense, two to three juniors on defense. The junior college tailback, [Ra’Quanne] Dickens, who is leading the conference in rushing, is a guy who was there last year and has played. He’s really grown into it.”

Dickens is actually a senior who transferred to the San Antonio university from Highland (Kansas) Community College for the 2017 season. His 9.22 yards per rush leads the Southland and ranks third in the nation, while his 123.6 rushing yards ranks ninth in the FCS.

“You’ve got to tackle well and stuff four people in the box and make them block,” Schultz said. “If you go even-even in the box, they’re going to make you pay.”

Copeland on watch list
Lamar’s defense, which does hold teams to 161.7 rushing per game, will have to do more than slow down Dickens.

“I’m glad he is being recognized for his hard work. It’s hard for a freshman to start sometimes, but you wouldn’t know that by watching Jon play. He is composed during practice and games, and that has helped elevate the program as a whole. I’m excited to see how he continues to develp through the season and his career.”

Copeland has thrown for 1,329 yards and accounted for 11 touchdowns (nine passing, one rushing, one receiving) this season, his 265.8 yards per game ranking fourth in Southland and 21st in the nation. Last Saturday, he went for 411 yards in a 52-34 win over Southeastern Louisiana, setting a UIW record for team passing yards in a single game.

Schultz said Copeland has been key to the visiting Cardinals’ emergence.

“For him to bring the freshman along that fast and that quick — you can watch him play the first game to right now — you can see him grow game by game and get more confidence in what he’s doing and how he handles things,” Schultz said. “I think the undersell on him that he does so well is what he does out of the pocket. He makes plays. He was 8 for 15 last week once he got out of the pocket for well over 200 yards.

Chart-toppers, too
Lamar’s rushing offense leads the Southland at 226.8 yards per game.

Much of the credit can go to senior quarterback Darrel Colbert, who has nine touchdowns on the season (Dickens has eight) but is second in the conference to UIW’s standout running back in rushing yards per game, 123.6 to 80.3. Junior college transfer A.J. Walker has filled a big need in the Lamar backfield and gone for 54.8 yards per game, good for ninth in the Southland.

History of the Cardinals
Lamar owns 3-2 all-time record over UIW, but has lost the last two meetings. UIW launched its football program in 2009 and Lamar relaunched its team in 2010 after a 20-year hiatus.

Before 2004, this wouldn’t have been a matchup of Cardinals. UIW’s athletic teams carried the nickname Crusaders until that year, when the university opted for a name that was more culturally sensitive. (A crusade is defined as “a medieval military expedition, one of a series made by Europeans to recover the Holy Land from the Muslims in the 11th, 12th and 13th centuries.”)

Lamar went from maroon and gray Brahmas to red and blue Cardinals in 1932. The blue was dropped in 1960.

MCT Credit Union will serve as gameday sponsor and hand out pink footballs to fans entering the stadium, while supplies last, in support of breast cancer awareness in October.

The Fan Zone will open at 11:30 a.m. The band Champagne Room will perform on the Corona band stage, near the marquee at the northwest corner of the stadium, starting at 1 p.m.

On the air
The game will air live on MyTX, a local affiliate of MyNetworkTV, and subscription-based ESPN+ (watch.espnplus.com). MyTX is available via antenna on KBMT subchannel 12.5, but may not show that way in Mid or South County due to its low-power status. It is available on DirecTV channel 43 and Spectrum channel 1230.
•
I.C. Murrell: 721-2435. Twitter: @ICMurrellPANews