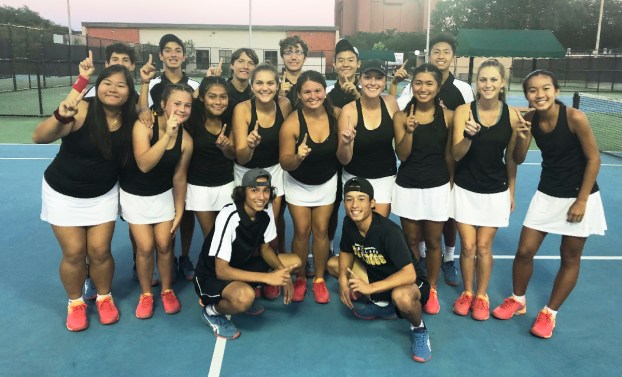 Two years after Barbers Hill eliminated Nederland from the UIL 5A team tennis playoffs, the Bulldogs won the regular season finale at Lamar University 11-8 to secure their 24th district championship, this time in 21-5A. The match was moved from Nederland, where the courts there are being resurfaced with material similar to the U.S. Open surfaces in New York, according to Lopez.

“These kids were committed from [the February] realignment to get better and keep the legacy,” said Lopez, Nederland’s coach since the 1990-91 season. “We knew Barbers Hill was coming into our district and we had never beaten them before. Hard work pays off. This is probably the sweetest victory in the last 20 years as a coach.”

Both teams were unbeaten going into the match, making it a de facto championship dual meet. Barbers Hill had the advantage in boys singles, 4-2, but Nederland took five of the six girls singles contests, three of which went three sets.

Doubles play proved crucial for the Bulldogs, as they went 2-1 in both boys and girls. Barbers Hill won the mixed doubles match.

Nederland will face Baytown Lee on Tuesday in the 5A bi-district round, with the site to be determined via coin flip.