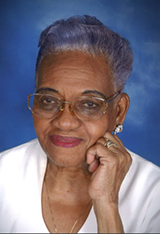 Mrs. Edna Alexander Francis, a longtime resident of Port Arthur, Texas, departed this life peacefully on Wednesday, October 3, 2018.  She was a native of Charenton, Louisiana, born September 9, 1927 and recently celebrated her 91st birthday with cherished nieces, nephews and her surviving younger sister, Anna Pearl Tyler of Jeanerette, Louisiana. Her parents, Charles and Pearl Freeman Alexander, preceded her in death.  She began her education in St. Mary’s Parish and graduated from night school in Port Arthur. Her employment career began early and included gaining experience in various fields of industry such as agriculture (harvesting, fisheries) and the service sector: health care (Mid-Jefferson County Hospital, Nederland, Texas – Housekeeping) and government facilities (Port Arthur City Hall – Janitorial) as well as private homes (Nannying).  She retired from Mid – Jefferson Hospital as the Housekeeping Supervisor after over 25 years of service.

She accepted Christ at an early age at the Mount Pleasant Baptist Church, Charenton LA. At the time of her death, she was a long-standing member of the Rock Island Missionary Baptist Church, where she had been active in Sunday School, the Mass Choir and the Mission. Additionally, during the 106th Church Anniversary, November 2017, she received a Certificate of Appreciation in recognition of valuable contributions. Edna was a Cancer (colon) Survivor of more than 13 years. Anyone who knew her, knew that she loved and trusted in God’s care and she now rests in His arms.

Visitation is scheduled from 9 am until 11am and funeral services begin at 11 am at Rock Island Baptist Church with Elder Kevin T. Domingo officiating. Burial will follow at Live Oak Memorial Park under the direction of Gabriel Funeral Home, Inc.