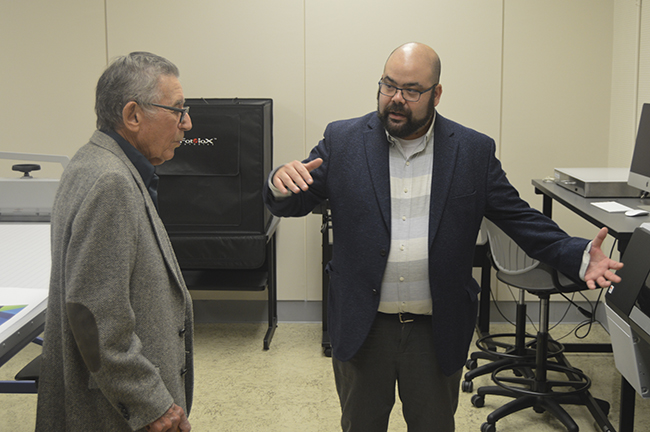 Ed Hogenson donated $500,000 to the college, which was used for the Business Management Office program and classrooms. His daughter, Debbie Spittler, had taken some of the college’s business programs.

New paint, carpet, light fixtures, furniture and computer equipment were included in a complete overhaul of nine classrooms and a lab in the Monroe Building.

“I am honored. Humbled. Overwhelmed. It improves on our studies in the facilities with ease,” Adriane Champagne, coordinator of business administration, said.

Champagne said the college has always taught cutting-edge concepts with modern techniques; but now, thanks to the donation, the college finally had the cutting-edge technology to match its instructions.

“Here we teach for tomorrow,” she said.

President Betty Reynard expressed the gratitude with which the college accepted the donation and what it was able to do with it.

“Mr. Hogenson knows first-hand the importance of a college education. His daughter is a perfect example of the success that can result from a degree at LSCPA,” Reynard said in an issued statement.

“Mr. Hogenson’s donation will ensure that generations of students at LSCPA will also enjoy a first-class education, supported by the most up-to-date equipment.”

After being taken on a tour of the new facilities, Hogenson said he wanted to help the school where his daughter attended.

“This was Debbie’s school, her classrooms,” he said. “OK, let’s spend the money here if we can.”