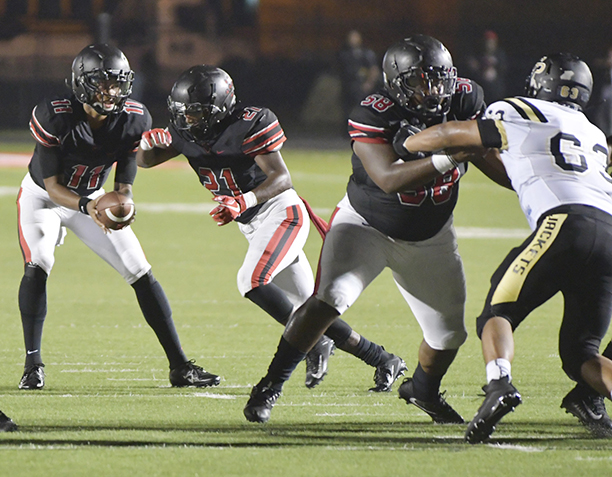 Through five games, Memorial sophomore Branden Chaney (21) has rushed for 578 yards (6.49 yards per carry) and seven touchdowns. (Jereem Augustine/Special to The News)

FOOTBALL: Off and running: Memorial, New Caney each hope to stay on top

The battle of the top two teams in the district will take place Friday as the Port Arthur Memorial Titans travel to New Caney to take on the Eagles in a District 9-5A-I showdown.

Last week in a 50-2 win over Goose Creek Memorial, Chaney went for 208 yards and three touchdowns.

“He brings a physical element when he runs the ball,” Morgan said of Chaney. “That’s how we want to be. He brings a level of consistency that makes it very comfortable to call plays. He knows what to do and takes care of the ball. He does a great job in pass protection.”

“It’s very different,” head coach Brian Morgan said. “A lot of teams build around offense. We score some points, but I think anybody in the building would tell you the defense is the strength of our team.

“We have a very different mindset than many of the teams we play. They have their best players on offense and want to score points. We’re the other way around.”

Morgan said the defense’s speed is what makes them great and the Titans’ offense is better for it.

The Titan defense will have to be disciplined as they take on the district’s second-ranked rushing offense. The Eagles average 251.6 rushing yards per game and have the third-best overall offense.

“They have an explosive offense and a really athletic quarterback,” Morgan said. “They’re pretty good at all three phases from a scheme standpoint. I used to recruit that area and a lot of their coaches, so I think it’s going to be a good game. They are going to test our defense for sure.”

Memorial quarterback Kameron Ladia will have to protect the ball as the Eagles secondary leads the district with nine interceptions with Kaylye Jackson leading the way with five.

The game is set for 7 p.m. at Texan Drive Stadium in New Caney.

NFL: Charles signs with Jaguars, could be activated vs. Cowboys

Memorial graduate and 10-year NFL veteran running back Jamaal Charles is not hanging up his cleats. Charles on Tuesday signed... read more